When in Rome, You Might Not Want to Bring Me

My boys love going through old photo albums and seeing themselves captured on film.  I have completely stocked about 20 albums full of pictures of their childhood thus far.  They can see themselves getting their first bath from Nana.  Or being burped by their father. Or getting swung around by their uncles.

Over the last 7 years, I appear in less than a dozen pictures out of thousands. Of course if you were to review the few I do appear in, three would show me in the hours after childbirth where my cheeks look like they're storing enough acorns for several long winters. I'm wearing no makeup and retaining an additional 6 pounds of fluids from my IV on top of the 50 pounds I packed on with each kid.

Today, Joey found a very old album with my vacation photos. Unfamiliar with seeing his mother in these books, Joey queried, "Who dat mommy?" As I walked over and recognized myself, I started laughing at these old pics that included some of my closest friends and traveling companions.

When I first met my friend Rada, she was already an extensive traveler. She was born in Russia, spoke multiple languages, and had seen much more of the world than I. Yet I dreaded whenever she returned from one of her exotic vacations. She would come to the lunch room at Aon armed with 15 rolls of scenery. There wasn't a single shot of her. In fact, there were no people whatsoever in any of her photographs. It was as though she was scoping out a locale for a movie shoot.

"Where are you?" I demanded, quickly flipping through the weighty stack.

"I was taking the pictures, so I'm obviously not in them," she responded matter-of-factly.

At Rada's send-off party (as she headed to Switzerland for her MBA program), she threw out the obligatory and non-binding "come visit me" invite to our large group of work friends.

Little did she know I take those half-hearted, just-trying-to-be-polite invites quite seriously. I wasn't going to let her blow another chance for incredible photo ops and allow her to return with 30 rolls of mountains and sheep. By God, she needed my help. Off to Switzerland I flew like Super-Girl but with in-flight snacks.

What I didn't anticipate was how jet lagged and slap-happy I'd be upon arrival. This was compounded by Rada's unrelenting push to drink and traipse across half of Europe. We were out the door by 8 am every morning and stumbling home shortly before sunrise. She kept insisting sleep was overrated. So when it came time to snapping those classy, timeless pictures I had envisioned...let's just say my judgement was somewhat impaired. For example:

Me (at the Pere Lachaise where Jim Morrison & Oscar Wilde are buried): Hey...(giggle)...Rada....I made you a sign...(giggle)....go stand next to that tombstone.  BWHAAA HAAAAA HAAAA

While in Greece, I opted to recreate the iconic image at Iwo Jima by having my friends do a faux-lifting of the Greek flag. Unfortunately, my little disposable camera couldn't quite zoom in like I had planned. But trust me when I say my companions performed admirably. I believe Rada is positioned quite heroically under an armpit. 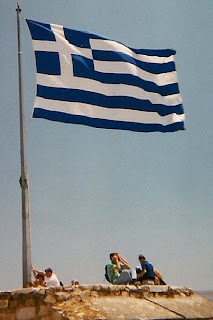 And what's a vacation without the random Charlie's Angels recreation? This was also taken on the streets of Greece. Unfortunately, Rada looks like she's channeling Elmer Fudd instead of Farrah Fawcett with her stance. I mean when you're not even 5 feet tall, there's really no need to crouch. Just be vaiwy vaiwy quiet... 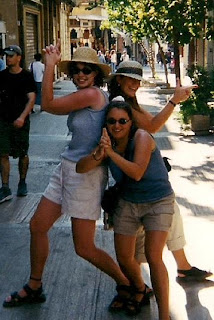 Our desire to further exploit our reputation as the ugly Americans came to a head (quite literally) at some random castle in France: 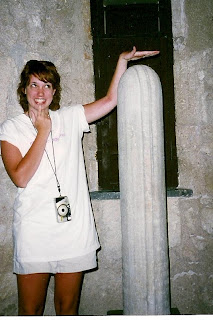 I could really go on with another 30 completely irreverent and cringe-worthy photos, but I believe I've already provided an accurate portrayl of my influence on my far more worldly pal.

And this is why I shouldn't be allowed to have any friends.﻿