The following appears in the June edition of Chicago Parent. 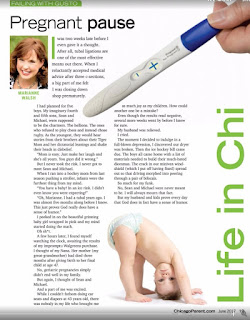 I was two weeks late before I even gave it a thought.

After all, tubal ligations are one of the most effective means out there. When I reluctantly accepted medical advice after three c-sections, a big part of me felt I was closing down shop prematurely.

I had planned for five boys. My imaginary 4th and 5th sons, Sean and Michael, were supposed to be the charmers. The hellions. The ones who refused to play chess and instead chose rugby. As the youngest, they would hear stories from their brothers about their Tiger Mom and her dictatorial leanings and shake their heads in disbelief.

“Mom is easy. Just make her laugh and she’s all yours. You guys did it wrong.”

But I never took the risk. I never got to meet Sean and Michael.

When I ran into a hockey mom from last season pushing a stroller, infants were the furthest thing from my mind.

“You have a baby! In an ice rink. I didn’t even know you were expecting!”

“Oh, Marianne. I had a tubal years ago. I was almost five months along before I knew. This just proves God really does have a sense of humor.”

I peaked in on the beautiful grinning baby girl wrapped in pink and my mind started doing the math.

A few hours later, I found myself watching the clock, awaiting the results of my impromptu Walgreens purchase. I thought of my Nana. Her mother (my great-grandmother) had died three months after giving birth to her final child at age 47. No, geriatric pregnancies simply didn’t end well in my family.

But again, I thought of Sean and Michael. And a part of me was excited. While I couldn’t fathom doing car seats and diapers at 43 years old, there was nobody in my life who brought me as much joy as my children. How could another one be a mistake? Even though the results read negative, several more weeks went by before I knew for sure.

My husband was relieved.

The moment I decided to indulge in a full-blown depression, I discovered our dryer was broken. Then the ice hockey bill came due. The boys all came home with a list of materials needed to build their much-hated dioramas. The crack in our minivan windshield (which I put off having fixed) spread out so that driving morphed into peering through a pair of bifocals. So much for my funk.

No, Sean and Michael were never meant to be. I will always mourn that fact. But my husband and kids prove every day that God does in fact have a sense of humor.