I Never Knew OCD Could Come in Handy

Believe it or not, I have a NEW obsession.

So unlike me, I know.

Read all about it by clicking HERE for full story in today's Chicago Parent.

The One Where Marianne Experiences a Miracle

You know how Jesus, Mary, and the disciples are always appearing in people's potato chips and guacamole?

I got them all beat.

A giant patch of my lawn turned brown and died over the summer, at which time the Archangel Michael made his presence known:

I am not sure what the Lord is trying to tell me by having an angel visit my lawn.  But when I showed the kids, Joey had a different interpretation:

"It's Blue from Blue's Clues!"

I'm going with the idea that God is rewarding my twisted sense of humor and prodigious ability to grow grass (the lawn kind, not the illegal kind).

Or Jesus may just be a Nickelodeon fan.

You decide.
Plastered by Marianne at Tuesday, September 17, 2013 26 comments:

When picking out mom friends, always go for the ones who are laughing.

It will make all the difference.

Back in 2002, Joe and I were in the middle of a long-distance relationship when I was living in New York.  He would fly out several times a month from Chicago and I would do the reverse.  Being the wonderful girlfriend that I was, I tried to keep things fun for each visit.  On one such occasion, we were happily exploring Manhattan and hit The Soup Kitchen.

Perhaps you know it better by its Seinfeld name.  Yes, this was the infamous "Soup Nazi."

No soup for you!

While balancing our soup and bananas (seriously, the Soup Nazi doles out bananas...not very Third Reich-ish if you ask me), a young pair approached us with uncommon zest and blinding smiles.  Naturally, we figured we were about to be mugged.

"HEY GUYS!!  Want tickets to see Dave Letterman?  All ya hafta do is answer one question about Dave and YOU'RE IN!"

Joe and I were not used to this much pep and froze.  The pair continued, undeterred.

"Ok, so your question is: What Indiana university did Dave attend?"

My husband shook his head in surrender, fully prepared to miss out on the taping because he hadn't the foggiest idea of the answer.

I, on the hand, am a trivia goddess.  I also happened to have a friend who once reminded me daily that Dave Letterman went to her school.

"Ball State!  The answer is BALL STATE!" I cried out.

And just like that, we were off to attend our first taping of a television show.

I remember it well.  As we walked in, you were either directed upstairs or downstairs based on how enthused you looked.  I was immediately directed towards the front because of my stupidly happy expression.  Sadly, my perpetually grouchy-looking husband was directed to the very back row.  I struggled for a minute against the urge to abandon him to his nosebleed seat, but instead sacrificed my front row spot to accompany him.

Dave's guest was Michael Douglas.  We sat through a few minutes of crowd warm-up and then Dave came out.  Remembering how my sister talked about her experience as an audience member on Oprah (where she raved about how warm and engaging Oprah had been with her audience), I was interested to see how Dave interacted.

Dave Letterman ignored his audience.  Between breaks, he spoke with his assistants, got his make-up retouched, and never once acknowledged all the people who had come to see him.

I never watched David Letterman again after that.  Nobody puts Baby in a corner.  Or rather in the last row with her grumpy-looking boyfriend.

So when the opportunity to see a taping of Steve Harvey came up, I was a little hesitant.  Yet a couple of my pals were turning 40 within a few weeks, and we decided to make a day of it:

I was amazed at how small and intimate the studio was.  Steve Harvey's warm-up guy must drink nothing but Red Bull and espressos.  The man had everyone clapping and dancing for so long, you thought you were in a Zumba class.

And then Steve came out.  I held my breath.  Was he going to pull a Letterman and ignore us, or actually show some kindness and appreciation regarding the fact that so many of us rearranged sitters, carpools, and kids all in an effort to come to his show.

Steve was awesome.  We got stories.  Interaction.  Personal attention.

We got some Steve love.

In an era where so many people don't even look up from their gadgets when they are talking to you, Steve Harvey gets it.  His show was delightful, and I can't wait to watch the entire season.

Next celebrity match-up: Snookie vs. Omarosa

I had high hopes that this weekend would help sway my husband towards appreciating the thrill and skill behind chess.

Any guess on how that turned out?

How Marianne Spent Her Summer Vacation

A friend asked me the other day what we did this summer and I thoughtlessly responded, "Nothing much."

Then I flipped through the pictures in my phone and realized I was full of malarkey.

The start of summer had us bidding farewell to a dear friend:


Then we said hello to Band Camp (or as I told my husband, Boxing Camp): 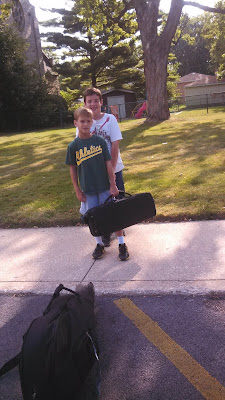 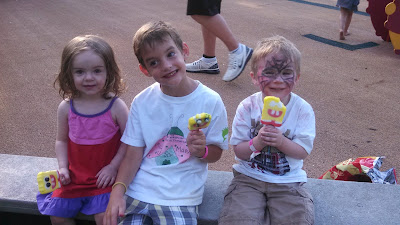 I met a Transformer: 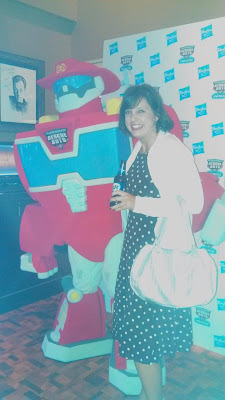 Miniature Friend also succeeded in finally getting me in for a real haircut at a place that costs more than $8 a trim.  Julianne at George the Salon did an amazing job and I fear my days of cheapie cuts are officially OVAH. 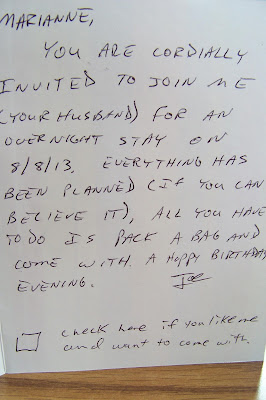 There were block parties: 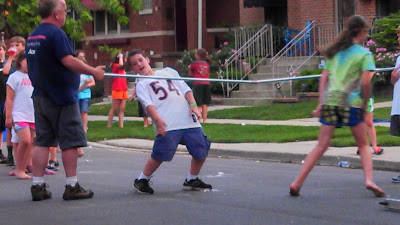 And trips to the beach: 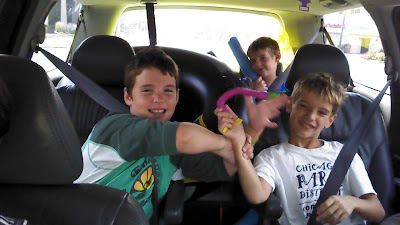 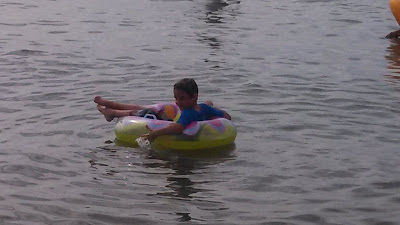 We road-tripped to Milwaukee.  Twice.

We did another fundraiser, this time benefiting the Gold Badge Society where the Chicago Fire Department got destroyed by the Chicago Police Department.  Local legend and neighborhood guy Herbie Johnson was an honoree: 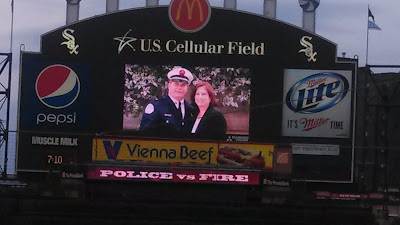 Fed up with the kids focusing too much on their gadgets, I evicted them to play outside.  Gadgets, it seems, can attract kids faster than Freeze Pops: 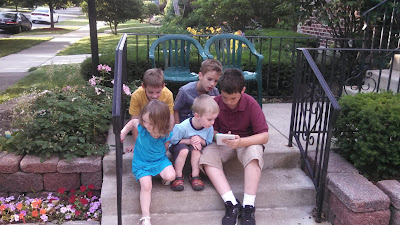 Joe and I also realized we are morphing into each other at a Listen to Your Mother reunion dinner in Naperville:


My 40th birthday festivities continued for most of August, and an old high school pal surprised the bajeezus out of me:


It took almost the entire summer, but Joey finally succeeded in passing the deep-end test at Kennedy Pool with his two brothers cheering him on:﻿ 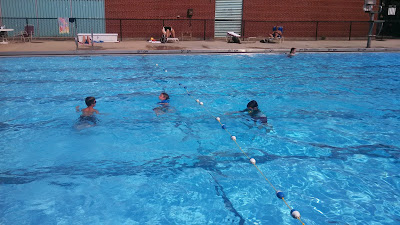 I tried to bank a little good karma by donating blood, and I even recruited a pal to come along:

Sadly, my hemoglobin was too low and they wouldn't let me donate.  I may need to increase my red meat intake or double down on my Flintstone vitamins soon.  The orange ones are delicious.

What's funny is up until I reviewed my summer pics, I really didn't think we had done that much.

So if I accidentally tell anyone that I'm still in my 30s, please have patience.

And buy me a hamburger.