The White Sox are totally hooking me up with some awesome tickets in exchange for this post about this Saturday's Ladies Night.  But seriously, I would have written it for free.  Just don't tell them that.  GO SOX!

My husband once thought it would be fun to take his full-term pregnant wife to a White Sox baseball game.  It was 90 degrees outside.  The game went into extra innings.  Worried White Sox staffers checked on me repeatedly, convinced I was about to deliver right there on the upper deck.

Subsequent to that day, Joe and I began shuttling our kids to White Sox baseball while still in their newborn carriers.  We were those parents you see mixing formula bottles and changing diapers between innings.  Indoctrination, we knew, needed to start young.  While writing this, my son Jack just ran in to tell me the first two Sox batters got triples and the third batter got a double, Sox up 2.

Some of my favorite days have been spent at The Cell with my boys.


Some of my other favorite days have been spent at The Cell without my boys.

One visit involved my sister and a mutual friend.  A few innings (and beers) into the game, you would have found three harried housewives frantically waving around their homemade sign:

OUR HUSBANDS THINK WE ARE AT A PTA MEETING.

Totally made it on the scoreboard.

While the White Sox aren't having the most stellar of seasons, going to a game is an event.  There are always extra perks and add-ons that maximize the fun.  This Saturday?

With super-cheap tickets available, you will feel like you have won the Grand Prize Game. Bonuses include:

The White Sox organization has never let my family or my friends down in providing a great time, great food, and great fun.

They are also the only baseball team in Chicago who has won a World Series in the last 100 years.

The following appears in the June edition of Chicago Parent. 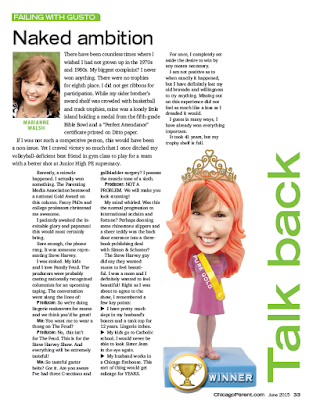 There have been countless times where I wished I had not grown up in the 1970s and 1980s. My biggest complaint? I never won anything. There were no trophies for 8th place. I did not get ribbons for participation. While my older brother’s award shelf was crowded with basketball and track trophies, mine was a lonely little island holding a medal from the 5th grade Bible Bowl and a “Perfect Attendance” certificate printed on Ditto paper.

If I was not such a competitive person, this would have been a non-issue. Yet I craved victory so much that I once ditched my volleyball-deficient best friend in gym class to play for a team with a better shot at Junior High PE supremacy.

Recently, a miracle happened. I actually won something. The Parenting Media Association bestowed a national Gold Award on this column (see write-up in Beverly Review HERE). Fancy PhDs and college professors christened me awesome. I patiently awaited the inevitable glory and paparazzi this would most certainly bring.

Sure enough, the phone rang. It was someone representing Steve Harvey. I was stoked. My kids and I love Family Feud. The producers were probably casting nationally recognized columnists for an upcoming taping.

The conversation went along the lines of:

Producer: So we’re doing lingerie make-overs for moms and we think you’d be great!

Me: You want me to wear a thong on The Feud?

Producer: No, this isn’t for The Feud. This is for the Steve Harvey Show. And everything will be extremely tasteful!

Me: So tasteful garter belts? Got it. Are you aware I’ve had three c-sections and gallbladder surgery? I possess the muscle tone of a sloth.

Producer: NOT A PROBLEM. We will make you look stunning!

My mind whirled. Was this the normal progression to international acclaim and fortune? Perhaps donning some rhinestone slippers and a sheer teddy was the backdoor entrance into a three-book publishing deal with Simon & Schuster? The Steve Harvey guy did say they wanted moms to feel beautiful. I was a mom and I definitely wanted to feel beautiful! It all made sense.

Right as I was about to agree to the show, I remembered a few key points:

For once, I completely set aside ambition and the desire to win by any means necessary. After turning down the opportunity, the producer was very gracious and understanding. I mumbled something about saving face with the PTA crowd.

I am not positive as to when exactly it happened, but I have definitely lost my old bravado and willingness to try anything. Missing out on this experience did not feel as much like a loss as I dreaded it would. I guess in many ways, I have already won everything important.