The Time I Almost Killed My Husband

The following appears in the January edition of Chicago Parent. 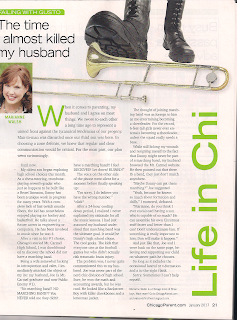 When it comes to parenting, my husband and I agree on most things. We swore to each other a long time ago to represent a united front against the tyrannical tendencies of our progeny. Man-to-man was discarded once our third son was born. In choosing a zone defense, we knew that regular and clear communication would be critical. For the most part, our plan went swimmingly.

My oldest son began exploring high school choices this month. As a chess-tutoring, trombone-playing 7th grader who just so happens to be built like a Bears’ lineman, Danny has been a unique work in progress for many years. With a complete lack of fast-twitch muscle fibers, the kid has nonetheless enjoyed playing ice hockey and basketball. He talks about a future career in engineering or computers. He has been involved in music since he was four years old.

After a visit to his #1 choice, Chicago’s storied Mt. Carmel High School, I was dumbfounded to discover the school did not have a marching band.

Being a wife somewhat lacking in introspection and calm, I immediately attacked the object of my ire: my husband, Joe (a Mt. Carmel graduate and now Public Enemy #1).

“No marching band? NO MARCHING BAND?? You NEVER told me they didn’t have a marching band!! I feel DECEIVED! Let down! RUINED!”

The voice on the other side of the phone went silent for a moment before finally speaking up:

“I’m sorry. I do believe you have the wrong number.”

After a 24-hour cooling down period, I realized I never explained my rationale for all the music lessons. I had just assumed my husband understood that marching band was the ultimate goal. It would be Danny’s high school clique. The cool geeks. The kids everyone saw at the football games but who didn’t actually risk traumatic brain injury.

The problem was, I never quite communicated this to my husband. Joe was never part of the nerd chic division of high school. Sure, he won the math and accounting awards, but he was cool. He looked like a Backstreet Boy with killer cheekbones and a letterman jacket.

While still licking my wounds and resigning myself to the fact that Danny might never be part of a marching band, my husband browsed the Mt. Carmel website. He then pointed out that there IS a band, they just don’t march anywhere.

“Maybe Danny can get them marching?” Joe suggested.

“Yeah, because he knows so much about formation and drills,” I muttered, defeated.

“Marianne, do you think I ever envisioned having a son who is capable of so much? He can assemble his own Christmas stuff faster and better than I can! Don’t underestimate him. If something is really important to him, Dan will make it happen.”

And just like that, Joe and I were back on the same page, believing and supporting our child on whatever path he chose.

So long as it included the occasional lateral or v-formation and a to-the-right flank.

Sorry. Sometimes I can’t help myself.
Plastered by Marianne at Thursday, January 12, 2017 4 comments: