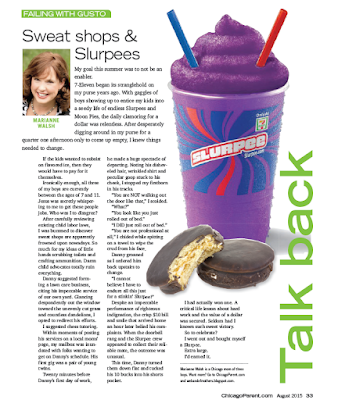 My goal this summer was to not be an enabler.

7-Eleven began its stranglehold on my purse years ago. With gaggles of boys showing up to entice my kids into a seedy life of endless Slurpees and Moon Pies, the daily clamoring for a dollar was relentless. After desperately digging around in my purse for a quarter one afternoon only to come up empty, I knew things needed to change.

If the kids wanted to subsist on flavored ice, then they would have to pay for it themselves. Ironically enough, all three of my boys are currently between the ages of 7 and 11. Jesus was secretly whispering to me to get these people jobs. Who was I to disagree?

After carefully reviewing existing child labor laws, I was bummed to discover sweat shops are apparently frowned upon nowadays. So much for my ideas of little hands scrubbing toilets and crafting ammunition. Damn child advocates totally ruin everything.

Danny suggested forming a lawn care business, citing his impeccable service of our own yard. Glancing despondently out the window towards the unevenly cut grass and countless dandelions, I opted to redirect his efforts. I suggested tutoring chess.

Within moments of posting his services on a local mom’s page, my mailbox was inundated with folks wanting to get on Danny’s schedule. His first gig was a pair of young twins. Twenty minutes before Danny’s first day of work, he made a huge spectacle of departing. Noting his disheveled hair, wrinkled shirt, and peculiar goop stuck to his cheek, I stopped my firstborn in his tracks.

“You are NOT walking out the door like that,” I scolded.

“You look like you just rolled out of bed.”

“You are not professional at all,” I chided while spitting on a towel to wipe the crud from his face. Danny groaned as I ordered him back upstairs to change.

“I cannot believe I have to endure all this just for a stinkin’ Slurpee!”

Despite an impressive performance of righteous indignation, the crisp ten-dollar bill and smile that arrived home an hour late belied his complaints. When the doorbell rang and the Slurpee crew appeared to collect their reliable mate, the outcome was unusual. This time, Danny turned them down flat and tucked his ten bucks into his short pockets.

I had actually won one. A critical life lesson about hard work and the value of a dollar was secured. Seldom had I known such sweet victory.

So to celebrate? I went out and bought myself a Slurpee.

I’d earned it.
Plastered by Marianne at Saturday, September 19, 2015 2 comments: