The time we went ice skating at a place suited more for the Rockefellers....or folks from Minneapolis.  Visit today's Chicago Parent HERE.

The near-miss.
﻿﻿
It is the theme of my life.  I should have met my husband a hundred times before I was 27 years old.  We knew many of the same people.  We went to the same college.  I once celebrated St. Patrick's Day at his house  ten minutes after he departed for another bash.

In many ways, Joe could have easily been another near-miss.  The Fates must have been ready to pull their hair out by the time they successfully got us together in the same hotel lobby (me as an event planner and Joe as a union decorator) two days after a late-night, beer-infused first encounter at the legendary Old St. Pat's block party.

That night, Joe offered me a free bratwurst.  I convinced myself that this guy was obviously not "the one."  The love of my life would be a sushi sophisticate, perhaps a North Shore grad, and surely not some sausage-hawking southsider.

Then we spotted each other in that lobby.  It was pure coincidence.  And the most important near-miss of my life to date was averted.

I have had near-misses involving national tragedies, sorted scandals, and plain old stupid decisions that would have resulted in great unhappiness.

I do not know if I have an angel on my shoulder or if I am just plain lucky.

That is a lie.

﻿I totally have an angel on my shoulder.  I call her Barb.  For some reason, Barb has been steering me away from misfortunate my entire life.

Not that I haven't experienced misfortune.

But Barb has a great track record.  I don't think she sleeps much.

Last night, I was driving home with all three of my sons in the minivan.  We had done some last-minute shopping.  Danny needed a Christmas outfit (I had to battle with him to see that track pants and a hoodie weren't appropriate clothes to mark the Savior's birth).  It was also a ploy so I could give my husband time to assemble the large metal wagon the kids were getting for Christmas to support their new recycling business.

﻿It was rainy and dark.  The roads were packed.  I came to a stop at a light that already had a line going back countless cars.  A few seconds later, some sort of noise (I am not sure if it was honking or the screech of brakes) drew my attention.  A car came barreling along and drove onto the sidewalk next to me.  The driver then smashed full-on into a streetlight.

That was when time stood still.  Shocked, I watched as the streetlight began to topple.  Jammed into my spot by traffic, I had nowhere to go to get out of its way.  I anticipated the trajectory, and realized with horror it was about to smash into the passenger side of my minivan, closest to Dan.

I didn't have any time to pull my son away or even formulate a plan before the post landed harmlessly next to us, with maybe two inches to spare.

Shakily, I was able to turn off the main street and call 911 for help.  I then walked back over to the other driver to see if she was okay.  My kids were following me, freaking the hell out, and begging to go back to the safety of the minivan on the side street as cars whizzed by.  They wouldn't go back without me, though.  And I needed to stay with the young driver until police arrived.

It was the most important near-miss I have every experienced.

And once again, I know I have the best guardian angel ever.

I also realize that if Barb has moved on and now sits on Dan's shoulder, I have much to celebrate.  She has been a great protector and she knows where my heart lies.

And that sausage guy that started it all.

I would like to wish every reader out there much love, happiness, and protection for the year ahead.  As for me, I will continue to be humbled at the great many gifts I have been given.

But for a simple turn of fate, how much I would truly miss.

Andrea's going to kill me.  Based on the plague, forgetfulness, and general procrastination, I have taken to emailing a few of my CONTEST letters.

Apparently, this may be against the rules.

Rules I made up and promptly forgot.

Regardless, I'm hoping my worthy competition lets this one slide as I received a lovely form email from the people at Lemax, good for (fingers crossed) one point.

Thank you for your interest in Lemax Village Collection.

It is great to receive response from consumers like you. It let us know what consumers like or not like. We will forward your message to the related department. Any potential products which are in compliance with the company's marketing strategy we will try the best to produce.

Please keep on writing to us and we value your suggestions/comments. Should you have further question, please feel free to contact us.

Thanks again for your email to www.lemaxcollection.com. Hope you enjoy your collection of Lemax!

A little Lemax love is better than no Lemax love, right?

Check out Andrea's way better entry HERE.  If she lets it slide, my score will be increased to the unsavory number 69.  Or quite possibly, not.

Week 27 of The Contest continues!

I just wanted to let you know that I am not a knick-knack person. I hate Waterford Crystal, Beleek Irish plates, and all things Precious Moments. Anyone who has ever gifted me with one of these items would easily be able to buy them back for a quarter at my yearly garage sale.

Dustables are society's way of keeping citizens from rising up and demanding a better and more perfect world.

It's a theory, anyway.

There are a few exceptions to my no knick-knack world realm.  Lemax Christmas Village pieces are included.

I don't have enough plugs in my house to contain them all.

Last Christmas, I swore that I needed to put an end to the madness and stop buying more.  But then November rolled around. 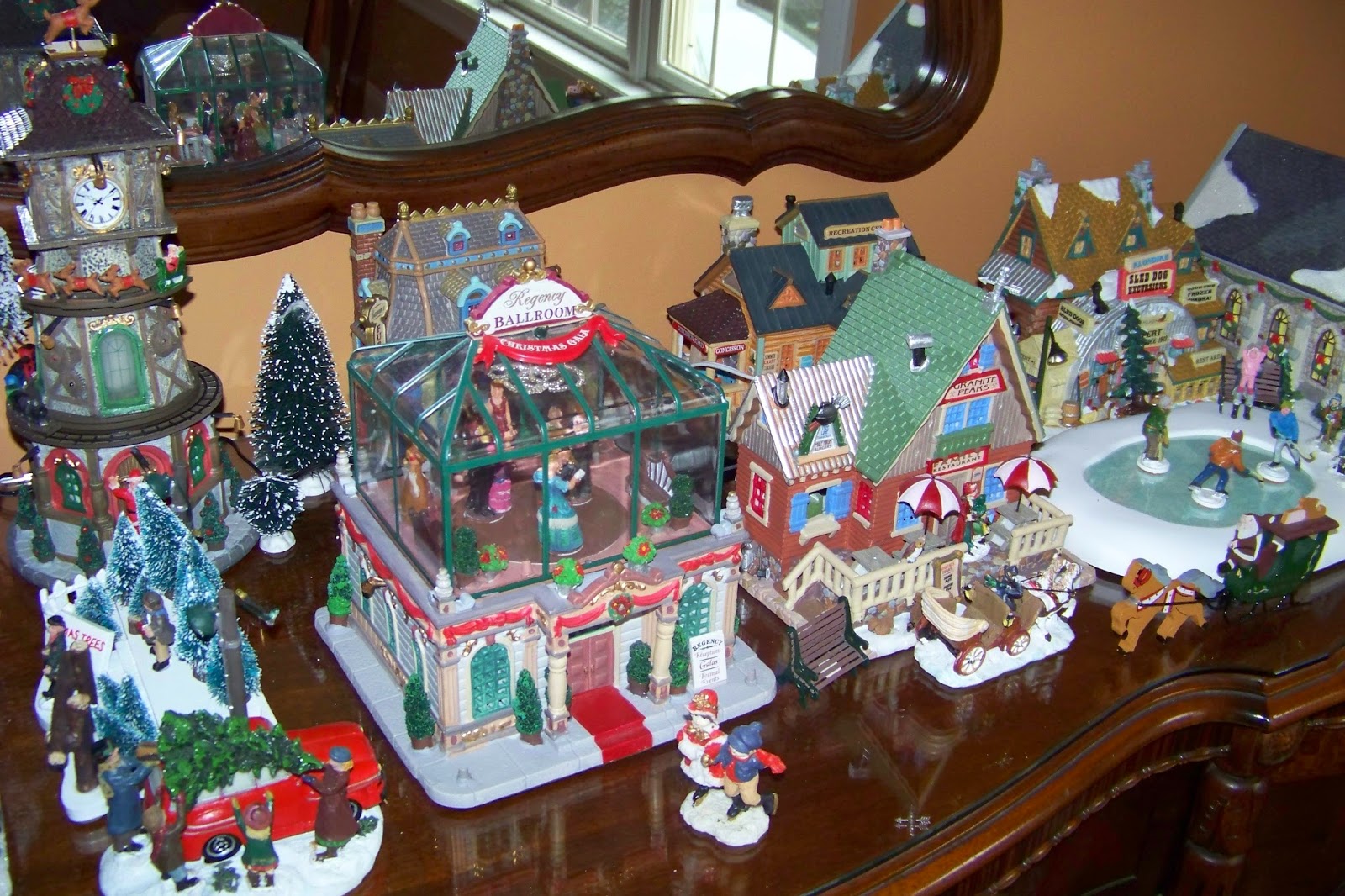 The bell tower and little ice pond were like waving Heisenberg's blue baggie in front of a meth addict.  I got them on sale at Michael's with a 20% off coupon.

And I am so happy I did.

I figure that in lieu of having a year-round buying problem or serious drug addiction, Lemax is my contained little love affair.

Thank you for always bringing a little naughty to my nice.

So did Lemax respond?  Not yet.  I have a feeling they're filling my latest order.  It could take some time.

My score stands firmly at 68.  Check out the competition HERE!

The following appears in the December issue of Chicago Parent, but had a little inspiration from my buddy Andrea over at Maybe It's Just Me.

When eight-year-old Virginia O’Hanlon wrote The New York Sun in 1897 to question whether or not there truly was a Santa Claus, the response resulted in one of the most celebrated holiday letters of all time. Francis Pharcellus Church penned the iconic words, assuring the young girl that, “Yes, Virginia, there is a Santa Claus…he exists as certainly as love and generosity and devotion exist.”

Oh how I wish Mr. Church was around today. No, I do not need him to persuade my youngest son, Joey, that there is a Santa Claus. Joey knows that to be true. Rather, I wish he could convince my seven-year-old that his father is not secretly moonlighting as St. Nick himself. 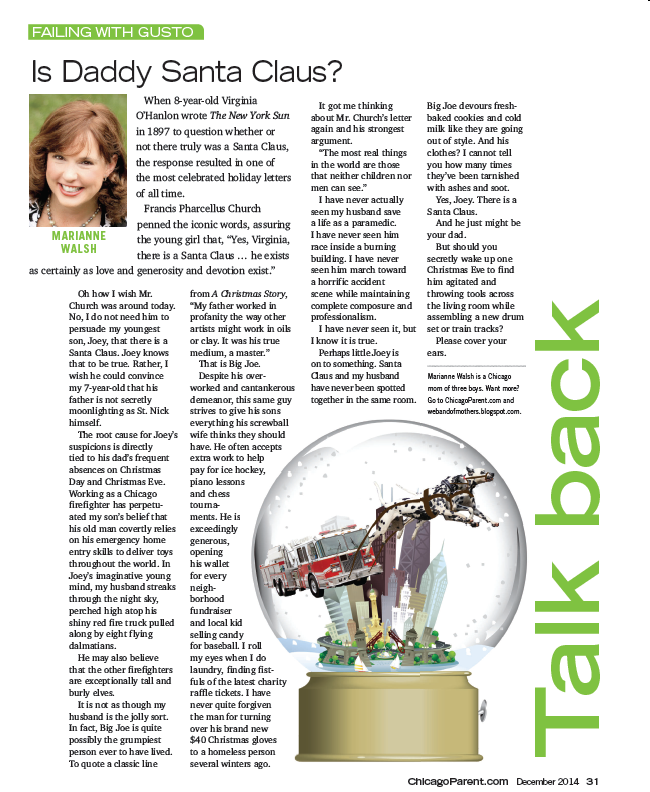 The root cause for Joey’s suspicions is directly tied to his dad’s frequent absences on Christmas day and Christmas Eve. Working as a Chicago firefighter has perpetuated my son’s belief that his old man covertly relies on his emergency home entry skills to deliver toys throughout the world. In Joey’s imaginative young mind, my husband streaks through the night sky, perched high atop his shiny red fire truck pulled along by eight flying Dalmatians.

He may also believe that the other firefighters are exceptionally tall and burly elves.

It is not as though my husband is the jolly sort. In fact, Big Joe is quite possibly the grumpiest person ever to have lived. To quote a classic line from A Christmas Story, “My father worked in profanity the way other artists might work in oils or clay. It was his true medium, a master.” That is Big Joe.

Despite his over-worked and cantankerous demeanor, this same guy strives to give his sons everything his screwball wife thinks they should have. He often accepts extra work to help pay for ice hockey, piano lessons, and chess tournaments. He is exceedingly generous, opening his wallet for every neighborhood fundraiser and local kid selling candy for baseball. I roll my eyes when I do laundry, finding fistfuls of the latest charity raffle tickets. I have also never quite forgiven the man for turning over his brand new $40 Christmas gloves to a homeless person several winters ago.

Perhaps little Joey is onto something. Santa Claus and my husband have never been spotted together in the same room. Big Joe devours fresh baked cookies and cold milk like they are going out of style. And his clothes? I cannot tell you how many times they’ve been tarnished with ashes and soot.

Yes, Joey. There is a Santa Claus. And he just might be your dad. But should you secretly wake up one Christmas Eve to find him agitated and throwing tools across the living room while assembling a new drum set or train tracks?

Week 26 of The Contest continues!

With Christmas as my inspiration, I found the perfect product to celebrate this week - Kinetic Sand.  Sounds dirty, right?

I have a sensory kid. Sensory seekers love sand. It is their nature to dive head-first into sandy, grainy heaven whenever the opportunity arises. Sand is their happy place.

I hate finding it in the kids’ beds after the beach. I hate when it gets between my toes. I hate shaking out towels full of the stuff. Sand is my mortal enemy. 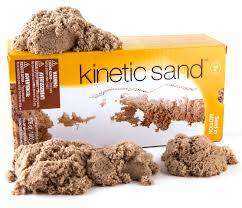 So what is a mom to do when her 7-year old continues to beg for a sandbox or indoor sand kit? Why, she buys Kinetic Sand for Christmas this year. I found the stuff at a local store and I wanted to see how truly non-messy it was. The stuff is gold. No spillage. No sand in my toes. No sensory overload.

And my first grader will know for a fact that Santa loves him way more than mommy.

On behalf of all the sensory people in my home….

To date, no response.  But I continue to hold out hope.  In the interim, check out Andrea's letter today!  The contest may be getting closer!
Plastered by Marianne at Friday, December 05, 2014 8 comments: