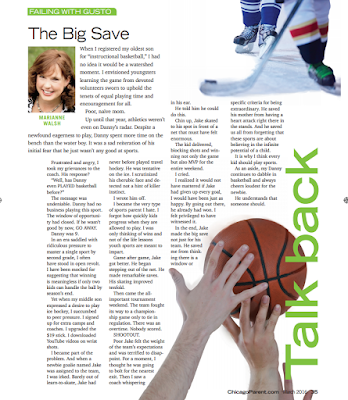 The following appears in the March edition of Chicago Parent magazine.

When I registered my oldest son for “instructional basketball,” I had no idea it would be a watershed moment. I envisioned youngsters learning the game from devoted volunteers sworn to uphold the tenets of equal playing time and encouragement for all.

Up until that year, athletics weren’t even on Danny’s radar. Despite a newfound eagerness to play, Danny spent more time on the bench than the water boy. It was a sad reiteration of his initial fear that he just wasn’t any good at sports.

Frustrated and angry, I took my grievances to the coach. His response? “Well, has Danny even PLAYED basketball before?”

The message was undeniable. Danny had no business playing this sport. The window of opportunity had closed. If he wasn’t good by now, GO AWAY.

In an era saddled with ridiculous pressure to master a single sport by second grade, I have often stood in open revolt. I have been mocked for suggesting that winning is meaningless if only two kids can handle the ball by season’s end.

Yet when my middle son expressed a desire to play ice hockey, I succumbed to peer pressure. I signed up for extra camps and coaches. I upgraded the $19 stick. I downloaded YouTube videos on wrist shots.

I became part of the problem. And when a newbie goalie named Jake was assigned to the team, I was irked. Barely out of learn-to-skate, Jake had never before played travel hockey. He was tentative on the ice. I scrutinized his cherubic face and detected not a hint of killer instinct.

I wrote him off.

I became the very type of sports parent I hate. I forgot how quickly kids progress when they are allowed to play. I was only thinking of wins and not of the life lessons youth sports are meant to impart.

Game after game, Jake got better. He began stepping out of the net. He made remarkable saves. His skating improved tenfold.

Then came the all-important tournament weekend. The team fought its way to a championship game only to tie in regulation. There was an overtime. Nobody scored.

Poor Jake felt the weight of the team’s expectations and was terrified to disappoint. For a moment, I thought he was going to bolt for the nearest exit. Then I saw a coach whispering in his ear.

He told him he could do this.

Chin up, Jake skated to his spot in front of a net that must have felt enormous.

The kid delivered, blocking shots, and winning not only the game but also MVP for the entire weekend. I cried. I realized it would not have mattered if Jake had given up every goal, I would have been just as happy. By going out there, he had already won. I felt privileged to have witnessed it.

In the end, Jake made the big save not just for his team. He saved me from thinking there is a window or specific criteria for being extraordinary. He saved his mother from having a heart attack right there in the stands. And he saved us all from forgetting that these sports are about believing in the infinite potential of a child.

It is why I think every kid should play sports.

As an aside, my Danny continues to dabble in basketball and always cheers loudest for the newbie.

He understands that someone should.
Plastered by Marianne at Thursday, February 25, 2016 6 comments:


The indisputable hockey story of the week has been John Scott. The 6'8" enforcer of the NHL went from being bullied and shamed by an NHL representative (who wanted him to bow out of the All-Star game) to scoring two goals and being named  MVP. He was applauded, celebrated, and carried around the ice by teammates who perhaps forgot he weighs nearly 300 pounds.

The lesson to my kids?

Always play with heart. Play hard even when nobody is watching. Even if everyone on the ice is faster, more agile, or more talented. Even if you think the whole world is against you.

While not everyone may have been watching, good things happened Monday for a couple of Chicago Wolves' elder statesmen. AHL All-Stars and Wolves players Pat Cannone and Andre Benoit brought home sweet victory for the Central Division in a 4-0 rout with Cannone securing MVP honors.

Let the word go forth:

Chicago ice hockey is on fire.


The Chicago Wolves understand the growing interest in hockey in Chicago and are strong supporters of youth development. Last year, when my son Jack was new to the sport, he was pretty much a one-trick pony.  He would bank the puck against the boards and rely on speed to get up the ice.  Jack had no stick handling abilities whatsoever. Yet the Chicago Wolves believe in just these kinds of kids and their potential to improve.  They regularly offer up the big stage for young teams to play during intermission. It is just another reason to head to a game:


With hockey becoming the "it" sport in Chicago, The Chicago Wolves Fan 4 Pack, presented by Orville Redenbacher's, is a great way to bring the whole family out for live action without having to mortgage the farm.  Starting at only $89, packs include:

When it comes down to it, it is always more fun to cheer on the underdogs. The workers. Those who strive to be better and with enough heart, will get there.

Cheering on The Chicago Wolves, beyond just the spectacle and excitement, is part of that.

If you don't want the bundle. I've also got you covered for $5 off individual ticket purchases. Simply use the coupon code WALSH in the promo code box when ordering through Ticketmaster and get $5 off on each ticket.

Check out a game and let me know what you think!