I'm not going to lie. I never thought I could love another household tool as much as I love my Grip 'N Grab: 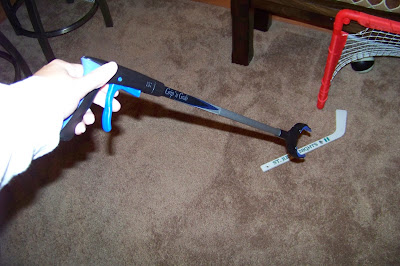 But that all changed this week.

Parenting Without a Net

The below essay was printed in the September edition of Chicago Parent magazine, the first time a by-line appeared on the cover!  Cake for everyone!


Several months back, I made the questionable parenting decision to allow my three boys to watch one of those Flying Wallendas walk across the Grand Canyon on a tightrope.   Live.  There were no safety nets or harnesses whatsoever.


What could possibly go wrong?


I tried to remain optimistic.  Discovery Channel was broadcasting the walk, and I considered the network to be similar to Disney Channel and PBS in terms of family-friendly programming.  Yet when the show began detailing all the Wallendas who had fallen to their early deaths, I felt compelled to call my husband at the firehouse for reassurance.


“So… you think it’s a bad idea then?  I’m sure Discovery Channel isn’t interested in airing a live tragedy.  They must recognize it’s in the bag.  The guy IS a professional.”


“I thought you never wanted to talk about poor Captain Phil again?”


I hung up with Joe feeling extremely unsure of myself.  But my sons were riveted and counting down the moments to the live feat.  If I attempted to put the kibosh on things now, my teetering regime would surely be overthrown.


I next tried convincing myself that the suspense associated with these televised stunts is practically a rite of childhood passage.  After all, didn’t every kid in the 1970s tune in to watch Evel Knieval?  And who could forget that episode of Happy Days where Fonzie jumped the shark on water skis?  We were a nation of daredevils, I told myself.  Isn’t that what being an American is all about?


Except me, of course.  I make my kids wear helmets when they play Duck-Duck-Goose.


By the time Nik Wallenda made it safely to the other side, praying to Jesus with each precarious step, I was a wreck.  My kids, on the other hand, cheered wildly and pulled out a jump rope so they could start “practicing” their careers as aerialists.


I naturally made them put on helmets.


Like most people, I am very relieved that Mr. Wallenda survived his personal challenge.  The man has an adoring wife and a young family whom would be devastated by his loss.  Yet as a mom, I am also thankful that I didn’t have to launch into a teachable moment about the dangers of walking across string stretched tightly above hundreds of feet of earth.  Had Mr. Wallenda fallen, I would still be dealing with the endless questions and extra hugs at bedtime.


In a way, I sense a certain kinship between myself and the bold Mr. Wallenda.  Parenting, as it turns out, is quite similar to tight-rope walking.


There are no safety nets or second chances.


But there is praying.  A whole lot of praying.
Plastered by Marianne at Saturday, October 26, 2013 11 comments:

Thanks to my friend Angie for sending a laugh.  I don't ever remember 7th Grade History being this interesting. 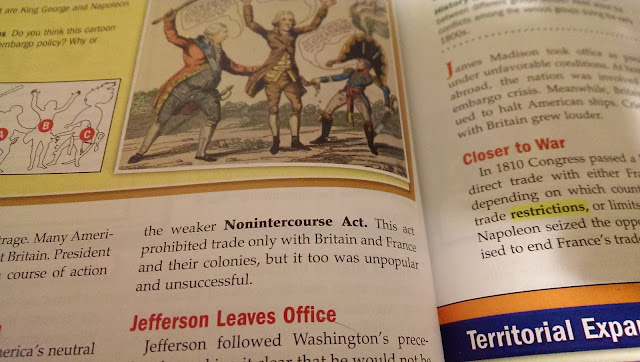 I wonder why the "Nonintercourse Act" was so unpopular?

Congress has apparently been mucking things up royally since 1809.  And giving stuff really bad names.

When Life Sucks, But Your Vacuum Doesn't

With my seasonal affective disorder guaranteeing a long and miserable Chicago winter, I have been saving for one of these happy lamps:

My zillionth vacuum broke, so I had to spend my savings on this instead:

A Matter of Syntax

When we last left off, your favorite cheapskate heroine was rejoicing in locating the perfect used cherry wood dining room table on Craigslist (i.e. Where serial killers find their prey).

So things obviously started going a little haywire right around then.

For the record, Craigslist sellers and I have diametrically opposed definitions of the phrase in great condition:


The second area of dispute I have with Craigslist sellers is what exactly defines "Chicagoland area."  Let's revisit the route needed to pick-up said Cujo table: 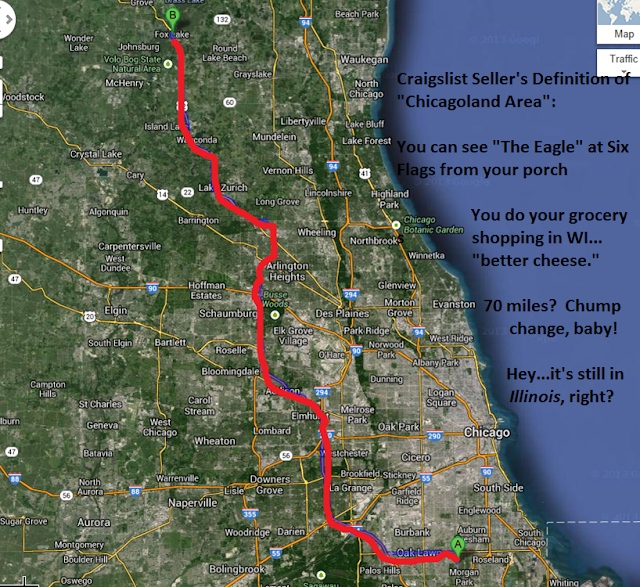 Now things would not have been so bad if I hadn't roped my husband into handling the pick-up, borrowing a truck from another firefighter, and operating on zero sleep as he was coming directly from the firehouse.  I quoted the seller's exact words of "Chicagoland area" and "in great condition" to him.  By the time Joe found himself heading home with one chewed-up and doggy defiled table a mere four hours later, I knew I was in trouble.  He was muttering things like "If you think I'm going to stain all this..." and "Good luck trying to fix that upholstering, you can't even thread a needle."

As someone who once started a fire with her glue gun and later wound up in the emergency room while trying to hang a picture, I have spent my life shunning the Do-It-Yourself lifestyle.  But now, with the mother of all renovations dropped in my dining room, I was at a loss.

Where was I to go?

What was I to do?

And more importantly, how would Joe ever trust me again?

The exciting conclusion is available today by clicking HERE over at Chicago Parent.

When Joe's dad passed away back in 2005, all 7 children worked together brilliantly to sort out the stuff that comes along with a parent dying. Part of the usual process includes claiming various pieces of furniture, jewelry, or special mementos. While some families squabble or hold decades-long grudges over this situation, that just wasn't the case with the Walsh family. When both Joe and his older brother Matt expressed mutual interest in an antique buffet handed down through the generations, they solved it in typical Walsh family style.

They flipped for it.

Joe's brother dug deep into his pockets for a quarter, Joe called it in the air, and the whole matter was resolved in under a minute.

Joe, being the ridiculously lucky sort of man that he is, naturally won.  In our thirteen years together, I have never seen Joe lose a coin toss.  A horseshoe most certainly was planted up his arse at birth and has thus remained there ever since.

Although I was thrilled with the beautiful cherry wood buffet, it proved a tad problematic in my shabby chic home.  First up, it didn't match the casual dining table handed down from my grandmother.

And in case you're wondering, no, I rarely buy new furniture.  My whole house has been furnished by people who know that I would probably use lawn furniture if they didn't gift me with used couches, tables, and lamps.

But after 8 years, even I was starting to wonder if maybe I shouldn't try a little harder to find a cherry wood dining table to go with the cherry wood buffet that suited our Queen Anne dining room.

In a moment of delusional thought, I priced a few new tables.  $2000 was the starting buy-in.

I turned to Craigslist.  Sure, I knew I was taking my life into my own hands and possibly facing murder and dismemberment, but by God, I would find us a table.

Before you could say "Last seen driving off in her powder blue minivan," I located a listing that seemed perfect.  A cherry wood table!  In "great condition!"  Listed in the Chicagoland area!  It felt as though the fates were finally working with me instead of conspiring against me.

What could possibly go wrong?

Why It's Important to Marry Well

I am very lucky to have married "up."

And if it wasn't for my husband, the kids would never know what a home-cooked meal looks like.

It happened at a baseball game this past spring.  My husband and I arrived early at the park when Joe noticed all the kids lining up for photos.  He asked why I had not brought any order forms or even the checkbook. I mumbled something about Danny forgetting his hat and Jack not combing his hair, so what was the point of pictures? Then I shrugged my shoulders in feigned defeat.

I have pretty much ordered pictures whenever there are pictures to be ordered. I also posses dozens of photo albums chronicling every moment of my children's young lives.

Photos are my thing.

Except those posed baseball ones.

Joe hastily dug through his wallet, found enough cash for the minimum order, and borrowed another kid's baseball hat before shoving the boys in the general direction of the photographer.

"We can't not order their baseball pictures!" he insisted, eyeing me suspiciously.

When the photos arrived a month or so later, my stomach dropped: 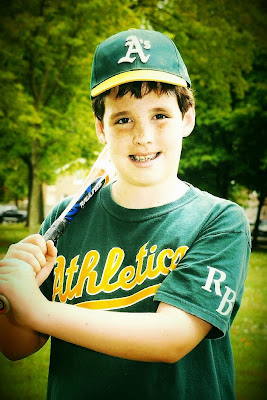 ﻿﻿
In a rare moment of familial unity, all three boys cooperated and looked great.  But that was never the issue.

The photos, just like every childhood baseball photo I have ever seen, reminded me of Adam Walsh.

As someone who grew up in the wake of the 1981 kidnapping and murder of little Adam, the image of the sweet little boy smiling from beneath his too-big baseball hat has haunted me for 30 years.  This baseball picture was widely circulated throughout the media at the time of the kidnapping, and for many mothers, it served as a reminder to hold tightly to their kids and trust nobody.

As a mother now, I have forced myself to shake off some of my Adam Walsh fears.  I realized that I needed to allow my boys to use public restrooms without screaming "EVERYTHING OKAY IN THERE?" every 10 seconds.  I needed to learn to let them cross the street without my all-clear.  I needed to fight the urge to homeschool them whenever I read a story of a shooting or child predator.

I started relying on statistical data and odds relative to stranger abductions in this quest.  For the first time ever, I have consciously suppressed my helicopter tendencies.  Most days, it is physically painful, but I am determined to ease up or I know my children will end up fleeing to Alaska to escape me.

I must say, though, this thing would be a whole lot easier if our last name wasn't Walsh.

And if my husband didn't insist on buying those damn baseball pictures.
Plastered by Marianne at Friday, October 04, 2013 26 comments:

I may quite possibly be the last person on the planet to have jumped on the "Breaking Bad" bandwagon.

But let me just say this.