My Kind of Town, For Now

The following appears in the December edition of Chicago Parent magazine. 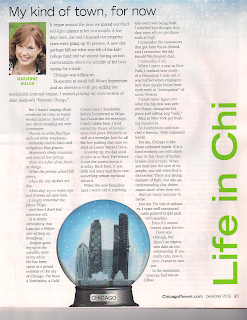 It began around the time we scored our third red-light camera ticket in a month. A few days later, Joe and I learned our property taxes were going up 20%. A new city garbage bill ate what was left of the kids’ college fund and we started having serious conversations about the nobility of the boys opting for a trade.

Chicago was killing us. Desperate to avoid full-blown depression and an obsession with pre-selling our marketable internal organs, I started playing my own version of Julie Andrew’s “Favorite Things.” But I wasn’t singing about raindrops on roses or warm woolen mittens. Instead, it was about escaping my own hometown.

Florida in white flip flops
with red shiny sunglasses,
Kentucky and its lakes and
indigenous blue grasses,
Montana’s cheap insurance
and natural hot springs,
these are a few of my favorite things.
When the private school bill comes,
when the city stickers are due,
when they try to make cops and firemen all seem bad,
I simply remember the places I’ll go,
and then I don’t feel sooooooo sad.

It is simply astonishing that I am not a billionaire writing on Broadway.

Despite growing up in the suburbs, most of my adult life has been spent as a proud resident of the city of Chicago. I’ve been a Northsider, a Gold Coaster, and a Southsider. Before I converted to White Sox Fanaticism for marriage, I bled Cubbie blue. I hold sacred my choice of favorite deep dish pizza (Pizano’s) as well as a nostalgic love for all the free parking that once existed on Lower Wacker Drive.

Growing up, my dad used to take us to Navy Pier before it became the tourist mecca it is today. Back then, it was dark and scary and there was something almost mythical about it.

When the new Comiskey (and I won't call it anything else ever) was being built, I watched and thought they were silly to put those seats so high.

I remember it all.

When I spent a year in New York, I realized how much of a Chicagoan I truly am. I was baffled when employers sent their people home from work early in “anticipation” of snow. Wusses.

I could never figure out what the big deal was over the floppy pizza and calling pop “soda.”

So I went home and married a fireman. With calloused hands.

For me, Chicago is like those calloused hands. It is a hard working city with more than its fair share of bumps, bruises, and scrapes. When you look into the eyes of its people, you will often find a dichotomy. There is a strong element of fight, but also an understanding that defeat comes more often than not.

And yet many continue to battle.

Not me. I’m sick of callouses. I want well-manicured nails painted bright pink with sparkles.

Even if it means crappy pizza forever.

I love you Chicago, but there’s an expiration date on our relationship. If you really care, now is your chance to woo me.

In the meantime, you can find me on Zillow.
Plastered by Marianne at Friday, December 09, 2016 4 comments: