My Life as a Fat and Slightly Disfigured Penguin

Jack loves penguins.  I think he loves them because I love them.  Whenever we go to the zoo, they are the only animals I insist we visit.  I appreciate the fact that they don't stink.  And they also dress well.

While I am definitely not an animal person, penguins make me happy.  They seem like they might have a good sense of humor.  No animal that walks like a penguin can take itself too seriously.  So when Jack asked what I wanted for Christmas, I answered honestly: 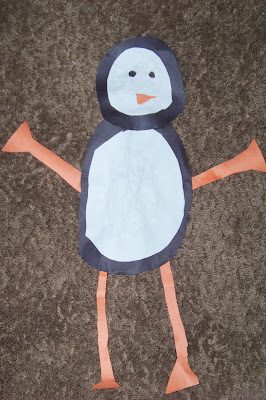 Concerned that my new penguin friend might be lonely living amongst humans, Jack also provided some friendly companions: 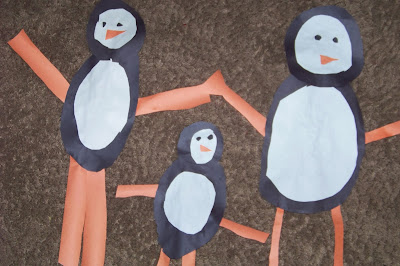 I was thrilled and made a big deal of the gift.

But when my youngest son Joey saw my reaction, he quickly disappeared into "his office" with a bottle of Elmer's Glue and a determined gait.

He reappeared hours later and presented me with this: 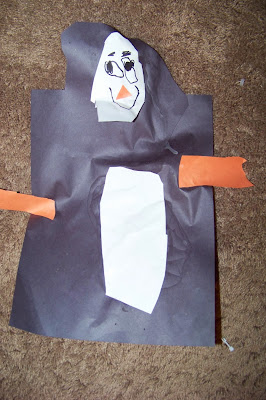 I assumed it was merely another cherished penguin buddy.
But I was corrected.
"No, mommy.  It's not a penguin.  I made YOU."
Considering that I have a bit of a waddle, I'm choosing to take this as a compliment.
My only other option would be to put down these awesome Christmas cookies and re-think my growing penguin belly.
NAH.
Plastered by Marianne at Friday, December 27, 2013 24 comments:

Jack's Christmas wishes for others this year:

For Dad: I would like to give my dad a new fire uniform because his uniform is very diry (dirty).

For Uncle Matt: I would like to give my Uncle Matt a new couch because his couch is broken.

For Grandpa: I would like to give my Grandpa a new grill because his grill is very rusty.

For Cousin Bobby: I would like to give Bobby a chance to go in the Olypicts (Olympics) for volleyball because he is very good at it. 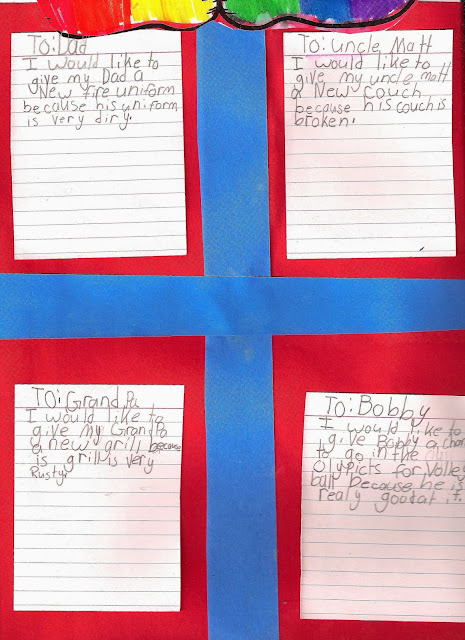 Have a great weekend, everyone!  And may all your couches be firm and intact!

One of my favorite Christmas movies of all-time is Will Ferrell's Elf.  It has a bit of everything: humor, music, and smiling.

So when I walked into my son's orthodontist's office this afternoon, I nearly peed myself.  Thank God for those Poise pads.

Just check out the Christmas spirit I found there:


It is really hard to have a bad day when a 6' tall elf is telling your kid his braces are coming off in February.

I'm embracing Christmas again, which has not always been the case in our PC-world of "holiday" spirit.  Read about my crazy rant by clicking HERE for today's Chicago Parent.

From the moment my Daniel started talking, there was nothing he felt wasn't up for debate.  As a first-time mother, I dug in and fought the good fight.  I didn't care if he hated a certain sweater or dinner option.  I was in charge.  I refused to let him win a single argument for fear he'd take over.

Nine years later, I am pooped.  I've caved more times than I care to admit.  I remain strong on the things most important to me (kindness, positive work ethic and wearing a winter hat), but I've faltered on others (using an "inside voice," 7 pm bedtimes, and wearing an undershirt).

This afternoon, Danny displayed a heightened level of bull-headedness with his cello instructor in regards to correct hand positioning.  Once again, he insisted that the teacher was wrong and he knew better.

I went apesh*t crazy on the ride home in our minivan, citing thousands of wasted dollars and driving hours because of his refusal to cooperate.  The cello had been his idea, I reminded him (although there may have been some subliminal subterfuge on my part).  In my frustrated state, I was ready to give up and let him quit the cello.  I didn't care how many times I heard parents lament allowing their children to walk away from instruments.  I didn't care how many times I heard adults express regret over their own choice to end their musical pursuits.

I was feeling murderous and ready to chuck the whole blasted thing.

But then I remembered how hard the early years of piano had been.  It had gone much the same way.  Danny would do everything short of faking his own death to get out of practice.  Only upon threats of a life without video games would he participate in recitals.  For a long time, he didn't seem to be finding any joy in music.

But then he got better.

And later still, he even got pretty good.

Last Thursday, Danny smiled upon completion of his recital song.  He knew he nailed it.  He walked away a little straighter, and there was a quiet confidence in mastering something very difficult.

I watched the video from his piano recital when I get home from cello and I decided to not give into my impulses.  I have never bought the argument that a child's successes are solely theirs.  For behind every great ice skater, gymnast, and professional athlete out there, there is a parent who withstood years of grueling schedules and oversight.  I also don't believe it takes a village to raise a child, but rather committed parents who don't give up when things get tough.

Naturally, I may change my position on this whole subject if the kid doesn't start flying right with his cello instructor very soon.

When Faith Plays a Hand

The following essay appears in the December issue of Chicago Parent Magazine: 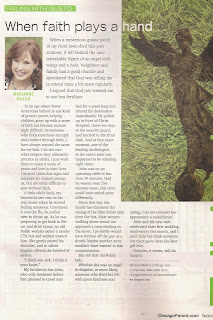 When a mysterious grassy patch of my front lawn died this past summer, it left behind the non-mistakable figure of an angel with wings and a halo (click HERE for post).  My six-year-old son contended it was Blue from “Blues Clues.”  Regardless of the interpretation, neighbors and family had a good chuckle and speculated that God was telling me to attend mass a bit more regularly.


I argued that God just wanted me to use less fertilizer.


In an age where fewer Americans believe in any kind of greater power, helping children grow up with a sense of faith has become increasingly difficult.  As someone who finds enormous strength and comfort through faith, I have always wanted the same for my kids.  I do not care what religion they ultimately practice as adults, I just want them to enjoy a sense of peace and love in their lives.  I instruct them that signs and miracles are indeed among us, but are often difficult to spot without faith.


A little while back, my brother-in-law was on his way home when he started feeling nauseous.  Convinced it was the flu, he pulled over to rid himself of the contents of his stomach.  As he was preparing to get back in the car and drive directly to his house, an old Polish woman exited a nearby CTA bus and walked towards him.  She gently patted his shoulder, and in stilted English offered the briefest of advice:


My brother-in-law John, who only moments before had planned to crawl into his own bed for a good long rest, altered his destination immediately.  He pulled up in front of Christ Hospital, threw his keys at the security guard, and hurried to the front desk.  And at that exact moment, one of the leading cardiologists in the entire state of Illinois just happened to be standing right there.


John was on an operating table in less than ten minutes.  Had he waited even five minutes more, this story could have ended quite differently.


Since that day, the family has discussed the timing of the little Polish lady from the bus.  Most women walking by themselves would not approach a man retching in the street.  I probably would have written off the guy as a drunk.  Maybe another mom wouldn’t have wanted to risk contamination of a perceived virus.


But not that old Polish lady.


Whether she was an angel in disguise, or more likely, someone who lived her life with great kindness and caring, I do not consider her appearance a coincidence.


John and his new wife celebrated their first wedding anniversary last month, and I can’t help but think someone out there gave them the best gift ever.


Miracles, it seems, still do happen.
Plastered by Marianne at Friday, December 06, 2013 12 comments:

After years of a strong anti-elf stance, I decided to finally embrace the whole idea.

Things have gone a little haywire from there.