The following appears in the May edition of Chicago Parent. 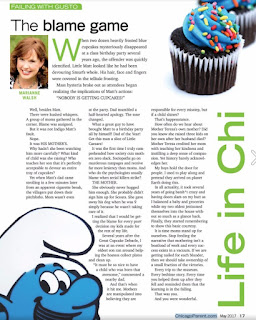 When two dozen heavily frosted blue cupcakes mysteriously disappeared at a class birthday party several years ago, the offender was quickly identified. Little Matt looked like he had been devouring Smurfs whole. His hair, face, and fingers were covered in the telltale frosting.

Mass hysteria broke out as attendees began realizing the implications of Matt’s actions:

“NOBODY IS GETTING CUPCAKES!”

There were hushed whispers. A group of moms gathered in the corner. Blame was assigned. But it was not Indigo Matt’s fault.

It was HIS MOTHER’S.

Why hadn’t she been watching him more carefully? What kind of child was she raising? Who teaches her son that it’s perfectly acceptable to devour an entire tray of cupcakes?

Yet when Matt’s dad came strolling in a few minutes later from an apparent cigarette break, the villagers put down their pitchforks. Mom wasn’t even at the party. Dad mumbled a half-hearted apology. The tone changed.

What a great guy to have brought Matt to a birthday party all by himself! Dad of the Year! Get this man a slice of Little Caesar’s!

It was the first time I truly comprehended how society cuts mothers zero slack. Sociopaths go on murderous rampages and receive far more leniency than moms. And who do the psychologists usually blame when serial killers strike?

She obviously never hugged him enough. She probably didn’t sign him up for scouts. She gave away his dog when he was nine simply because he wasn’t taking care of it.

I realized that I would be getting the blame for ever poor decision my kids made for the rest of my life.

Several years after the Great Cupcake Debacle, I was at an event where my oldest son ran around helping the hostess collect plates and clean up.

“It must be so nice to have a child who was born that awesome,” commented a nearby dad.

And that’s when it hit me. Mothers are manipulated into believing they are responsible for every misstep, but if a child shines?

How often do we hear about Mother Teresa’s own mother? Did you know she raised three kids on her own after her husband died? Mother Teresa credited her mom with teaching her kindness and instilling a deep sense of compassion. Yet history barely acknowledges her.

My boys hold the door for people. I used to play along and pretend they arrived on planet Earth doing this. In all actuality, it took several years of going batsh*t crazy and having doors slam on my butt as I balanced a baby and groceries while my two oldest jettisoned themselves into the house without so much as a glance back. Finally, they started remembering to show this basic courtesy.

It is time moms stand up for ourselves. Stop feeding the narrative that mothering isn’t a boatload of work and every success exists in a vacuum. If we are getting nailed for each blunder, then we should take ownership of a small fraction of the victories.

Every trip to the museum. Every bedtime story. Every time you helped them up after they fell and reminded them that the learning is in the falling.

And you were wonderful.
Plastered by Marianne at Wednesday, May 03, 2017 2 comments: