The following appears in the April edition of Chicago Parent. 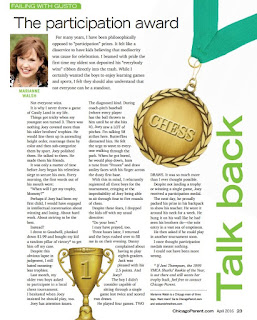 For many years, I have been philosophically opposed to “participation” prizes. It felt like a disservice to have kids believing that mediocrity was cause for celebration. I beamed with pride the first time my oldest son deposited his “everybody wins” ribbon directly into the trash. While I certainly wanted the boys to enjoy learning games and sports, I felt they should also understand that not everyone can be a standout.

It is why I never threw a game of Candy Land in my life.

Things got tricky when my youngest son turned three. There was nothing Joey coveted more than his older brothers’ trophies. He would line them up in ascending height order, rearrange them by color, and then sub-categorize them by sport. Joey polished them. He talked to them. He made them his friends. It was only a matter of time before Joey began his relentless siege to secure his own. Every morning, the first words out of his mouth were:

“When will I get my trophy, mommy?”

Perhaps if Joey had been my first child, I would have engaged in intellectual conversation about winning and losing. About hard work. About striving to be the best.

I drove to Goodwill, plunked down $1.99 and bought my kid a random pillar of victory* to get him off my case. Despite this obvious lapse in judgement, I still hated meaningless trophies.

Last month, my older two boys asked to participate in a local chess tournament.I hesitated when Joey insisted he should play, too.

Joey has attention issues. The diagnosed kind. During coach-pitch baseball (where every player has the ball thrown to him until he or she hits it), Joey saw a LOT of pitches. I’m talking 58 strikes here. Butterflies distracted him. He felt the urge to wave to everyone walking through the park. When he got bored, he would plunk down, hum a tune from “Frozen” and draw smiley faces with his finger across the dusty first base.

With this in mind, I reluctantly registered all three boys for the tournament, cringing at the improbability of Joey being able to sit through 4-5 rounds of chess.

Despite these fears, I dropped the kids off with my usual directive:

I may have prayed, too.

Three hours later, I returned and the boys rushed over to fill me in on their evening. Danny complained about having to play eighth graders. Jack was pleased with his 2.5 points. And Joey?

The boy I didn’t consider capable of sitting through a single game lost twice and scored two draws. He played four games. TWO DRAWS. It was so much more than I ever thought possible.

Despite not landing a trophy or winning a single game, Joey received a participation medal.

The next day, he proudly packed his prize in his backpack to show his teacher. He wore it around his neck for a week. He hung it on his wall like he had seen his brothers do – a sole entry in a vast sea of emptiness.

He then asked if he could play in another tournament soon.

I once thought participation medals meant nothing.

I could not have been more wrong.

*If Jeni Thompson, the 1999 YMCA Sharks’ Rookie of the Year, is out there and still wants here trophy back, feel free to contact Chicago Parent.
Plastered by Marianne at Thursday, April 07, 2016 6 comments: