The Cult of Parenthood

The following appears in the November edition of Chicago Parent. 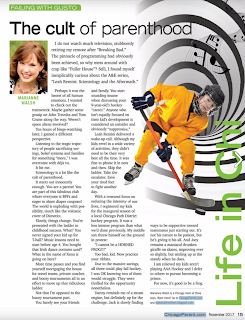 I do not watch much television, stubbornly retiring my remote after “Breaking Bad.” The pinnacle of programming had obviously been achieved, so why mess around with crap like “Fuller House?” Still, I found myself inexplicably curious about the A&E series, “Leah Remini: Scientology and the Aftermath.”

Perhaps it was the basest of all human emotions. I wanted to check out the train wreck. Maybe gather some gossip on John Travolta and Tom Cruise along the way. Weren’t space aliens involved?

Ten hours of binge-watching later, I gained a different perspective.

Listening to the tragic trajectory of people sacrificing savings, belief systems, and families for something “more,” I was overcome with déjà vu.

Scientology is a lot like the cult of parenthood.

It starts out innocently enough. You are a parent! You are part of this fabulous club where everyone is BFFs and eager to share diaper coupons! The world is exploding with possibility, much like the volcanic cover of “Dianetics.”

Slowly, things change. You’re presented with the ladder to childhood success. What? You never signed your kid up for tee-ball? Music lessons need to start before age four. You bought that Irish Dance costume USED? What in the name of Xenu is going on here?

More time passes and you find yourself mortgaging the house for travel teams, private coaches, and boozy tournaments all in an effort to move up that ridiculous ladder.

Not that I’m opposed to the boozy tournament part.

You barely see your friends and family. You start sounding insane when discussing your nine-year-old’s hockey “career.” Anyone who isn’t equally focused on their kid’s development is considered an outsider and obviously “suppressive.”

Leah Remini delivered a wake-up call. Although my kids revel in a wide variety of activities, they didn’t need to be their very best all the time. It was fine to phone it in now and then. Skip the ladder. Take the escalator. Save your tired feet to fight another day.

With a renewed focus on reducing the intensity of our lives, I registered my kids for the inaugural season of a local Chicago Park District hockey program. It was a less intensive program than what we’d done previously. My middle son threw himself on the ground in protest:

Due to the massive savings, all three could play fall hockey. I was okay knowing two of them would struggle. They were thrilled for the opportunity nonetheless.

Danny is reminding me of a steam engine, but definitely up for the challenge. Jack is slowly finding ways to be supportive towards teammates just starting out. It’s not his nature to be patient, but he’s giving it his all. And Joey remains a maniacal drunken giraffe on skates, improving ever so slightly, but smiling up at the stands when he does.

I am relieved my kids aren’t playing AAA Hockey and I defer to others to pursue becoming a prince.