This post is for all those who don't buy Halloween candy early because you would just explode like a hungry guppy.

You've been planning that baby since July.

I've got  your guidelines for kid shopping, free gifts for the husband, and even a Dyson Deal ready to go!  Visit HERE for today's Chicago Parent!

I believe every child growing up during the Star Wars and Battlestar Galactica era has a serious robot fetish.  It may help explain my Week 21 letter for The Contest.  Did I get some robot love back?  Find out below!

I first came across your Battroborg fighting robot set at the Chicago toy show last year.

I was immediately smitten.

And I totally wanted one.

But I didn’t want to share it with my kids. Given I had already completed the bulk of my holiday shopping at that point, I fought the urge to purchase a set because I suck at the whole “taking turns” thing.

Over the last eight months, whenever I spied Battroborgs at friends’ homes, I mysteriously disappeared to “check on the children.” For, like, an hour.

Because I needed to play with angry robots.

I am not sure what this reveals about me or my maturity level, but thank you for creating a product that the whole family will enjoy.

Once I actually let them.

Would you believe I got a response from an actual person and not a robot??

I also received some of these cute little guys.  I am not sure what precisely they do because the Battroborgs I have played with didn't have drones.


But I am intrigued.

Thank you, Battroborgs, for keeping Christmas fun this year and not replacing your workforce with robots.

Because I know you totally could if you wanted to.

This brings my total score to 68.  To check out the competition, visit Andrea today!

When Andrea and I started The Contest, the purpose was to celebrate products we used while proving that being funny and nice is the way to go.  Some weeks, I have struggled to identify products I am 100% devoted to, which makes me wonder why I didn't think of Windex much earlier:

If there isn't a bottle of Windex within reachable distance of me at all times, I get twitchy.  As evidenced by clicking HERE, there is also the tin-foil wearing, conspiracy-loving part of me who might believe Windex is the secret cure for ebola. 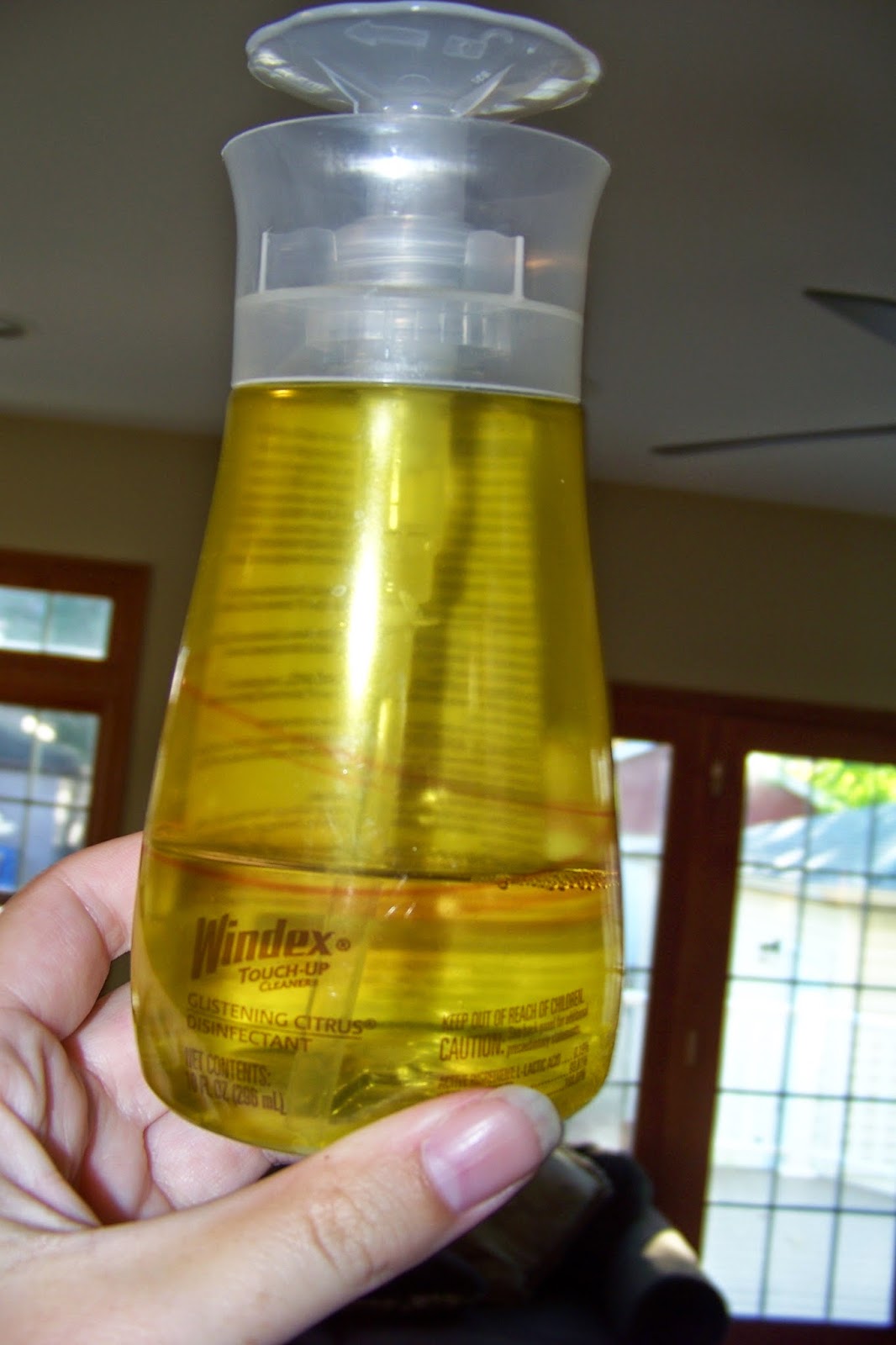 When you showed up at BlogHer a couple of years ago in Chicago with your big fancy booth, we were all supposed to ooh and ahh over your new Windex Touch-Up Cleaner. Your smiling representatives thrust a sample into my over-stocked goodie bag, and I reluctantly accepted it.

I should have grabbed the entire motherload before security escorted me out. I LOVE THIS STUFF. I use it on our counters every time my messy husband splatters chicken juice across three time-zones while tenderizing future fajita meat.

I use it when my three boys “miss.”

And they miss a lot.

I use it when Midwestern plagues move through Chicago, relegating kids to their beds and mothers to their mid-afternoon wine while desperately wishing the sickies were back in school. I use it ALL THE FREAKING TIME.

Which leads me back to not appreciating you two years ago at BlogHer. I am sorry. I was so very wrong. Please find it in your heart to forgive me. I have learned my lesson.

So did Windex write me off as another odd stalker fan?

This brings my total score to 63.  To check out the competition, visit Andrea today!

And thank you, Windex, for having a great sense of humor and an even greater selection of cleaning products!  Shout stain remover has removed poop from my carpet....and do you know how hard POOP is to get out of one's carpet?

In Pursuit of the Prodigy

The following appears in the October edition of Chicago Parent. 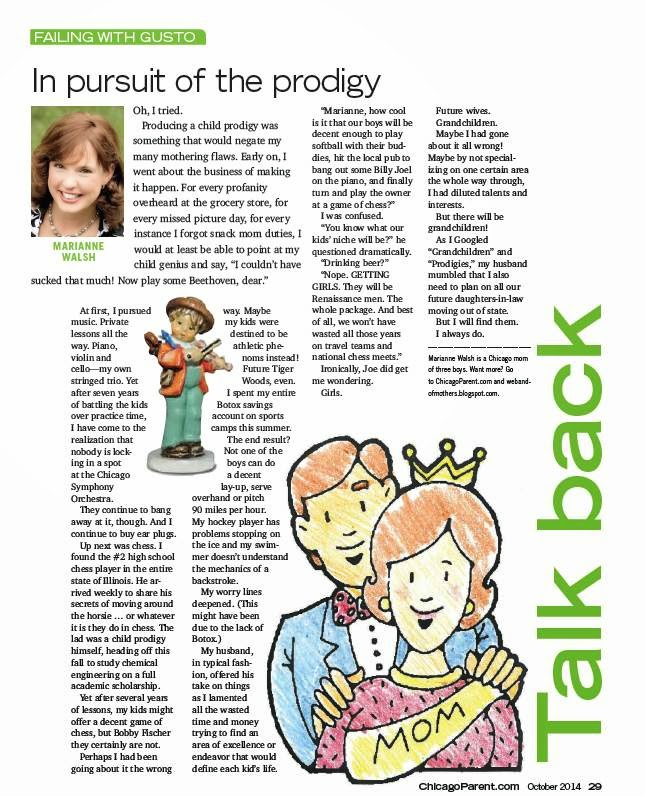 Producing a child prodigy was something that would negate my many mothering flaws. Early on, I went about the business of making it happen. For every profanity overheard at the grocery store, for every missed picture day, for every instance I forgot snack mom duties, I would at least be able to point at my child genius and say, “I couldn’t have sucked that much…now play some Beethoven, dear.”

At first, I pursued music. Private lessons all the way. Piano, violin, and cello - my own stringed trio. Yet after seven years of battling the kids over practice time, I have come to the realization that nobody is locking in a spot at the Chicago Symphony Orchestra. They continue to bang away at it, though. And I continue to buy ear plugs.

Up next was chess. I found the #2 high school chess player in the entire state of Illinois. He arrived weekly to share his secrets of moving around the horsie…or whatever it is they do in chess. The lad was a child prodigy himself, heading off this fall to study chemical engineering on a full academic scholarship. Yet after several years of lessons, my kids might offer a decent game of chess, but Bobby Fischer they certainly are not.

Perhaps I had been going about it the wrong way. Maybe my kids were destined to be athletic phenomenons instead! A future Tiger Woods even. I spent my entire Botox savings account on sports camps this summer. The end result?

Not one of the boys can do a decent lay-up, serve overhand, or pitch 90 miles per hour. My hockey player has problems stopping on the ice, and my swimmer doesn’t understand the mechanics of a backstroke. My worry lines deepened.

This might have been due to the lack of Botox.

My husband, in typical fashion, offered his take on things as I lamented all the wasted time and money trying to find a certain area of excellence or endeavor that would define each kid’s life.

“Marianne, how cool is it that our boys will be decent enough to play softball with their buddies, hit the local pub to bang out some Billy Joel on the piano, and finally turn and play the owner at a game of chess?”

“You know what our kids’ niche will be?” he questioned dramatically.

“Nope. GETTING GIRLS. They will be Renaissance men. The whole package. And best of all, we won’t have wasted all those years on travel teams and national chess meets.”

Ironically, Joe did get me wondering.

Maybe I had gone about it all wrong! Maybe by not specializing on one certain area the whole way through, I had diluted talents and interests! But there will be grandchildren! As I googled “Grandchildren” and “Prodigies,” my husband mumbled that I also need to plan on all our future daughters-in-law moving out of state.

But I will find them.

So here's the thing. I got a little behind on my letter writing for The Contest.  I'm going to blame it on all my chauffeuring responsibilities coupled with a bout of autumn seasonal depression.  In hasty realization that Andrea has an entire year's worth of letters ready to go, I dropped a line to Hostess.

Maybe it was four lines.

While brief, it still reflects the joy I feel at the return of Twinkies.

I knew you would be back.

So did Hostess respond?  To be fair, they probably just got my letter this week.  As of right now, my score holds at 53.  Poor Andrea had no idea of the depths of my ADHD when we started this.  I best get busy writing letters before she kills me.

No sooner did I wake up from my afternoon nap than I found this in the mail from Hostess: 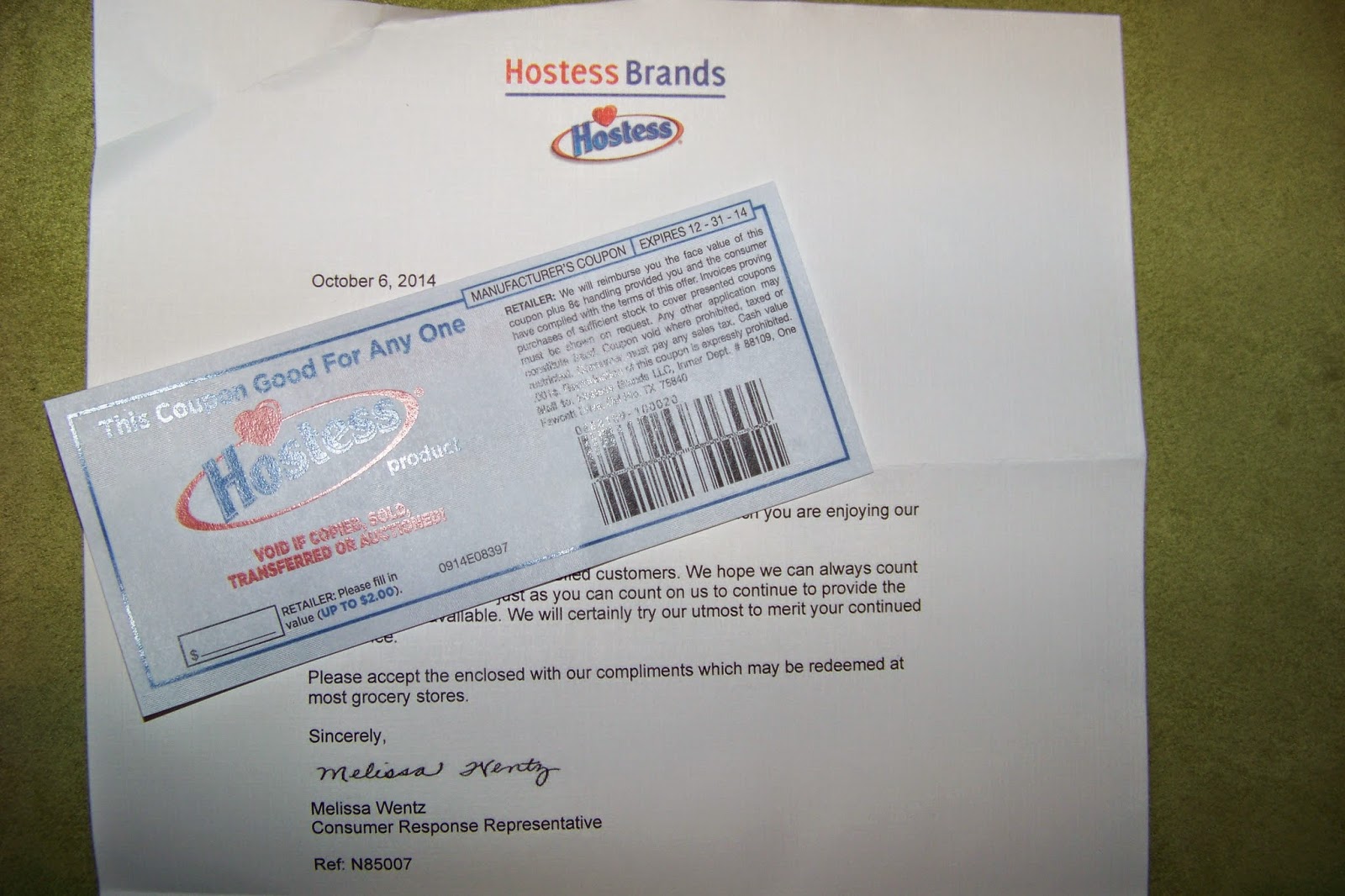 I am starting to wonder if brevity is the key to letter-writing success.


For Week 18 of The Contest, I admit to one of the few crimes I have ever committed in life.

Normally, I do not steal things. In fact, I am the type of person who will march right back into the grocery store to pay for the case of bottled water when the cashier fails to notice it under the cart. I feel guilty when I think of doing something wrong. I blame my Catholic upbringing and an extra strand of culpability in the old double helix. 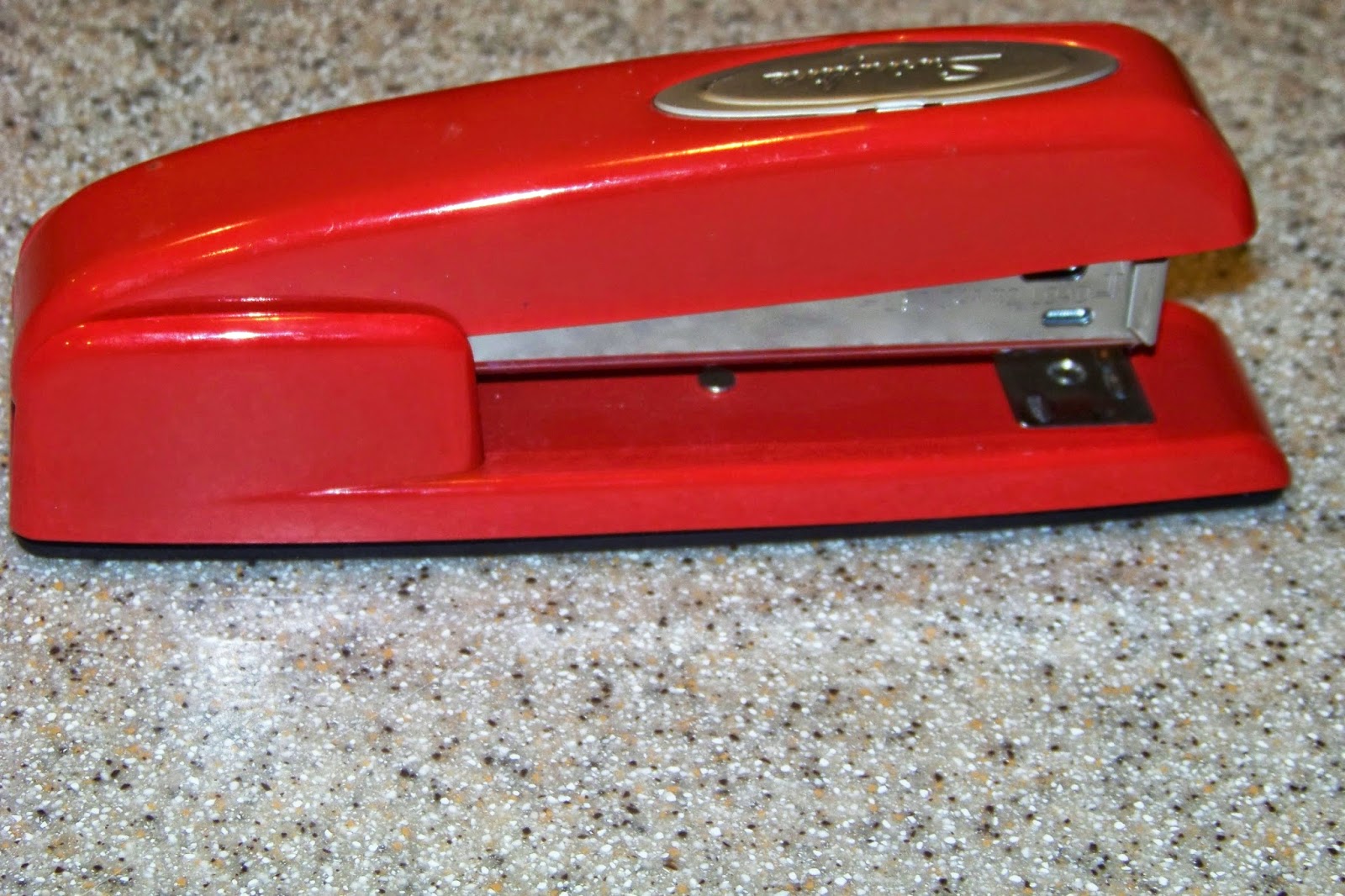 Sadly, I wound up ruining my 100% honesty rating courtesy of your bright red Swingline stapler. It all started with a history of wretched staplers during the late 1990s. I would break and jam just about every one that came across my desk. As I furtively tried to combine 100 pages of insurance jargon and gobbledy-gook, profane and foul language sprang from my mouth as though I was speaking in tongues. I needed to end the madness.

And go to confession.

In 2002, I was embarking on a new job for a start-up insurance company when the office manager tossed an Office Max catalogue on the desk. She advised me to select whatever supplies I needed to do my job. As I leafed through thousands of pages of offerings, I worried no product out there could withstand my frustrated blows while I joined stacks of collated press releases and financial statements together.

And then I saw it.

It was movie-star sexy. I giddily placed my order and let me tell you…waiting for that stapler to appear was like counting down the days until Christmas morning. When it finally arrived, I picked up a monster stack of collated materials and shoved it between the grips of Big Red.

My love was unholy.

Over the next five years, Big Red never failed. So when it came time for me to move on from that job, I knew I could not leave this treasured and loyal companion behind for some random office worker to abuse or discard. Big Red was coming with me.

And I didn’t feel guilty. The hardest part about my life as a now-criminal is full disclosure. Every time I have to fill out an employment application, “Have you ever stolen anything from your workplace?” I have to fess up. But I don’t regret it for one second. Thank you for injecting a little “bad girl” into this old double helix,

So did Swingline respond?

They sent a small magnetic message board (they must be aware of my memory issues) and some other goodies, but damned if I can remember where I put them.  I hope Andrea (the competition) takes my word for it.

Anyway, this brings my current total to 53.  The march to letter supremacy continues next week!
Plastered by Marianne at Friday, October 03, 2014 8 comments:

Have you heard the latest? 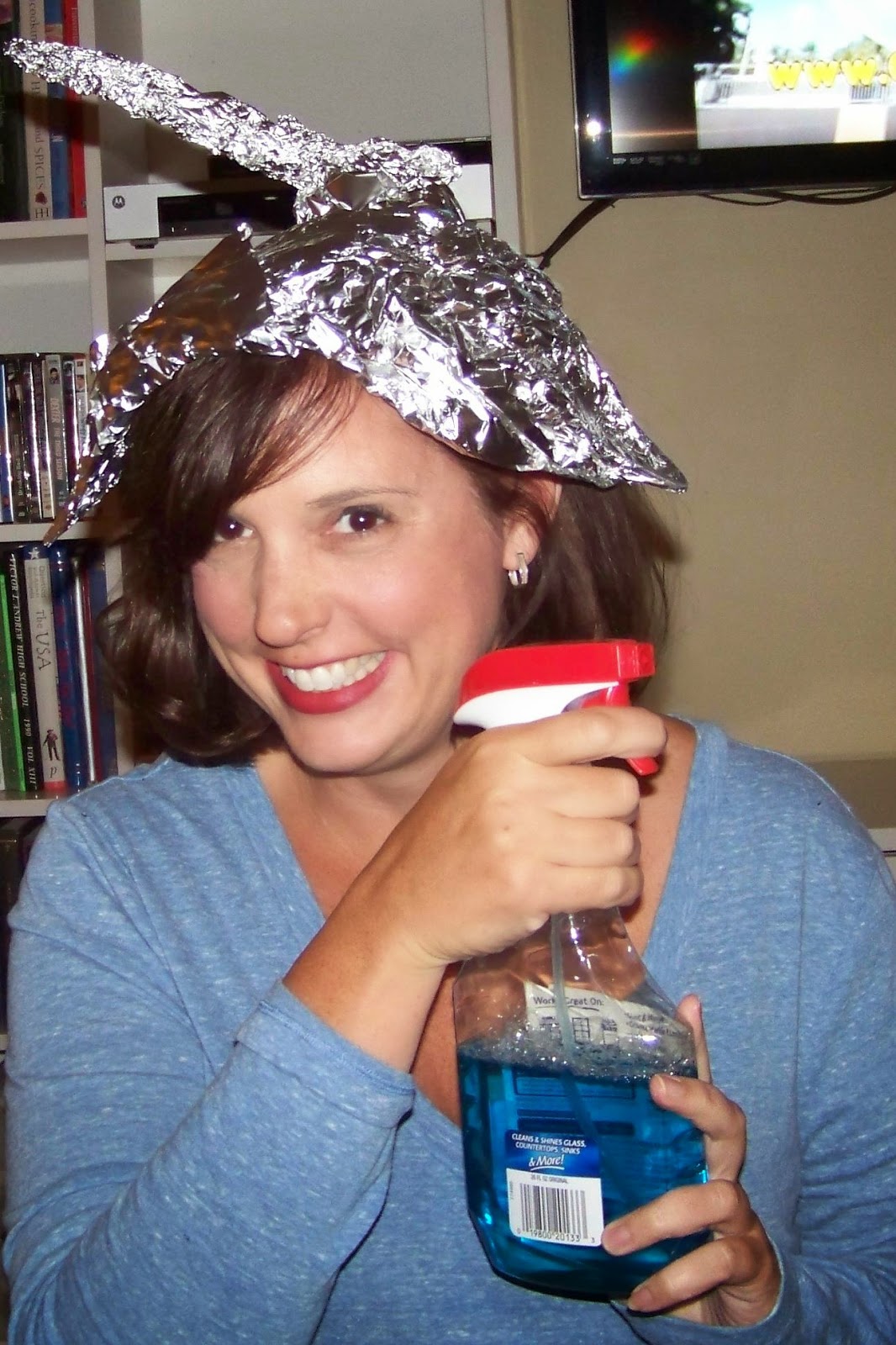