The following appears in the December edition of Chicago Parent. 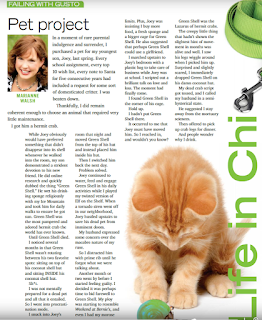 In a moment of rare parental indulgence and surrender, I purchased a pet for my youngest son, Joey, last Spring. Every school assignment, every top ten wish list, every note to Santa for five consecutive years had included a request for some sort of domesticated critter. I was beaten down.

Thankfully, I did remain coherent enough to choose an animal that required very little maintenance.

I got him a hermit crab.

While Joey obviously would have preferred something that didn’t rescind into its shell whenever he walked into the room, my son demonstrated a strident devotion to his new friend. He did online research and quickly dubbed the thing “Green Shell.” He wet his drinking sponge religiously with my Ice Mountain and took him for daily walks to ensure he got sun. Green Shell was the most pampered and adored hermit crab the world has ever known.

I was not mentally prepared for a dead pet and all that entailed. So I went into procrastination mode.

I snuck into Joey’s room that night and moved Green Shell from the top of his hut and instead placed him inside his hut.

Then I switched him back the next day.

Joey continued to water, feed, and engage Green Shell in his daily activities while I played my twisted version of Elf on the Shelf. When a tornado siren went off in our neighborhood, Joey hustled upstairs to save his dead pet from imminent doom.

My husband expressed some concern over the macabre nature of my rouse.

So I distracted him with prime rib until he forgot what we were talking about.

Another month or two went by before I started feeling guilty. I decided it was perhaps time to bid farewell to Green Shell. My ploy was starting to resemble “Weekend at Bernie’s,” and even I had my morose limits. Plus, Joey was insisting I purchase more food, a fresh sponge, and a bigger cage for Green Shell. He also suggested that perhaps Green Shell could use a girlfriend.

I marched upstairs to Joey’s bedroom with a plastic bag to take care of business while Joey was at school. I scripted out a brilliant talk on love and loss. The moment had finally come.

I found Green Shell in the corner of his cage.

I hadn’t put Green Shell there.

It occurred to me that Joey must have moved him. So I reached in and wouldn’t you know?

Green Shell was the Lazarus of hermit crabs.

The creepy little thing that hadn’t shown the slightest hint of movement in months was alive and well. I saw his legs wiggle around when I picked him up. Surprised and slightly scared, I immediately dropped Green Shell on his damn coconut hut.

My dead crab script got tossed and I called my husband in a semi-hysterical state. He suggested I stay away from the mortuary sciences.

Then offered to pick up crab legs for dinner.

And people wonder why I drink.