The following appears in the February edition of Chicago Parent, copies are almost completely gone at my local hockey rink, so be sure to find one today! 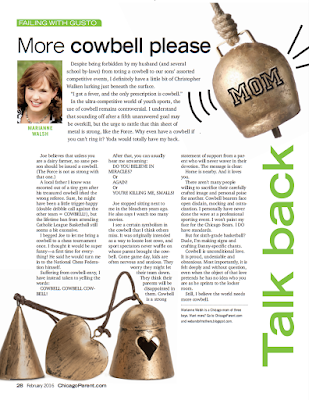 Despite being forbidden by my husband (and several school by-laws) from toting a cowbell to our
sons’ assorted competitive events, I definitely have a little bit of Christopher Walken lurking just beneath the surface.

“I got a fever, and the only prescription is cowbell.”

In the ultra-competitive world of youth sports, the use of cowbell remains controversial. I understand that sounding off after a fifth unanswered goal may be overkill, but the urge to rattle that thin sheet of metal is strong, like the Force. Why even have a cowbell if you can’t ring it? Yoda would totally have my back.

Joe believes that unless you are a dairy farmer, no sane person should be issued a cowbell. The Force is not as strong within that one.

A local father I know was escorted out of a tiny gym after his treasured cowbell irked the wrong referee. Sure, he might have been a little trigger-happy (double dribble call against the other team = COWBELL!), but the lifetime ban from attending Catholic League Basketball still seems a bit excessive.

I begged Joe to let me bring a cowbell to a chess tournament once. I thought it would be super funny – a first time for everything! He said he would turn me into the National Chess Federation himself.

Suffering from cowbell-envy, I have instead taken to yelling the words:

After that, you can usually hear me screaming:

DO YOU BELIEVE IN MIRACLES?

Joe stopped sitting next to me in the bleachers years ago. He also says I watch too many movies.

I see a certain symbolism in the cowbell that I think others miss. Originally intended as a way to locate lost cows, sport spectators never waffle on whose parent brought the cowbell. Come game day, kids are often nervous and anxious. They worry they might let their team down. They think their parents will be disappointed in them. Cowbell is a strong statement of support from a parent who will never waver in their devotion. The message is clear:

Home is nearby. And it loves you.

There aren’t many people willing to sacrifice their carefully crafted image and personal poise for another. Cowbell bearers face open disdain, mocking, and ostracization. I personally have never done the wave at a professional sporting event. I won’t paint my face for the Chicago Bears. I do have standards.

But for 6th grade basketball?

Cowbell is unconditional love. It is proud, undeniable, and obnoxious. Most importantly, it is felt deeply and without question, even when the object of that love pretends he has no idea who you are as he sprints to the locker room.


I am a full-fledged hockey mom. It took me years to figure out the blue line and what constitutes "off-sides," but I am there.

And I am totally broke. Because ice hockey is freaking expensive.

But now I live with all these damn hockey fans who won't stop clamoring for live hockey. What do they want from me next...blood?

Which brings me to The Chicago Wolves. In the past, I have been honored to participate in a focus group for the Wolves where I beat the drum of "Yeah, the tickets are affordable, but dude...a hot dog and a coke is going to run you another $100."

The Chicago Wolves Fan 4 Pack, presented by Orville Redenbacher's is a great way to bring the whole family out for live hockey without having to sell your body to science. Starting at only $89, packs include:

Having been to several games, the spectacle and excitement of live hockey is like nothing you've ever seen. With 21 seasons without a losing record, the Wolves are also a proud sponsor of youth hockey:


If you don't want the bundle. I've also got you covered for $5 off individual ticket purchases. Simply use the coupon code WALSH in the promo code box when ordering through Ticketmaster and get $5 off on each ticket.


For all my local Chicago hockey-obsessed friends, my family and I have always had an amazing time at the games. Enjoy and let me know what you think! 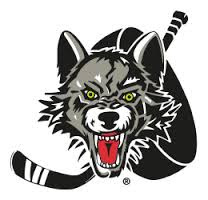