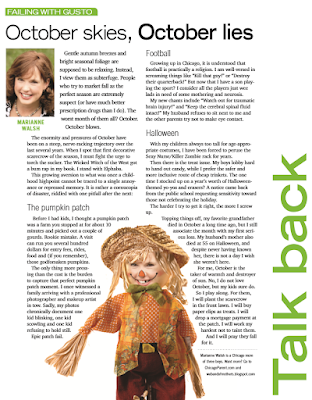 The following appeared in the October 2015 edition of Chicago Parent. I never got around to sharing it here because I was hiding under several blankets eating Ding-Dongs with a box of Kleenex.

Gentle autumn breezes and bright seasonal foliage are supposed to be relaxing. Instead, I view them as subterfuge. People who try to market fall as the perfect season are extremely suspect (or have much better prescription drugs than I do). The worst month of them all? October.

The enormity and pressures of October have been on a steep, nerve-racking trajectory over the last several years. When I spot that first decorative scarecrow of the season, I must fight the urge to torch the sucker. The Wicked Witch of the West got a bum rap in my book. I stand with Elphaba.

This growing aversion to what was once a childhood highpoint cannot be traced to a single annoyance or repressed memory. It is rather a cornucopia of disaster, riddled with one pitfall after the next:

The Pumpkin Patch
Before I had kids, I thought a pumpkin patch was a farm you stopped at for approximately ten minutes and picked out a couple of gourds. Rookie mistake. A visit can run you several hundred dollars for entry fees, rides, food, and (if you remember), those godforsaken pumpkins.

The only thing more pressing than the cost is the burden to capture that perfect pumpkin patch moment. I once witnessed a family arriving with a professional photographer and makeup artist in tow. Sadly, my photos chronically document one kid blinking, one kid scowling, and one kid refusing to hold still.

Football
Growing up in Chicago, it is understood that football is practically a religion. I am well-versed in screaming things like “Kill that guy!” or “Destroy their quarterback!” But now that I have a son playing the sport? I consider all the players just wee lads in need of some mothering and neurosis.

My new chants include “Watch out for traumatic brain injury!” and “Keep the cerebral spinal fluid intact!” My husband refuses to sit next to me and the other parents try not to make eye contact.

Halloween
With my children always too tall for age-appropriate costumes, I have been forced to peruse the Sexy Nurse/Killer Zombie rack for years.

Then there is the treat issue. My boys lobby hard to hand out candy while I prefer the safer and more inclusive route of cheap trinkets. The one time I stocked up on a year’s worth of Halloween-themed yo-yos and erasers? A notice came back from the public school requesting sensitivity towards those not celebrating the holiday.

The harder I try to get this one right, the more I screw up.

Topping things off, my favorite grandfather died in October a long time ago, but I still associate the month with my first serious loss. My husband’s mother also died at 55 on Halloween, and despite never having known her, there is not a day I wish she wasn’t here.

For me, October is the taker of warmth and destroyer of sun. No, I do not love October, but my kids sure do. So I play along. For them, I will plant the scarecrow in the front lawn. I will buy paper clips as treats. I will drop a mortgage payment at the patch. I will work my hardest not to taint them.

And I will pray they fall for it.
Plastered by Marianne at Wednesday, October 19, 2016 3 comments:

Days of My Life


The following appears in the September edition of Chicago Parent. 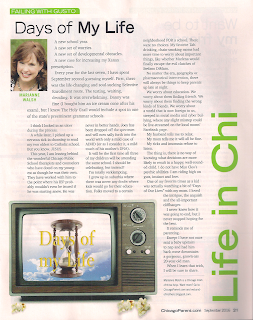 A new set of worries.

A new set of developmental obstacles.

A new case for increasing my Xanax prescription.

Every year for the last seven, I have spent September second-guessing myself. First, there was the life-changing and soul-sucking Selective Enrollment route. The testing, waiting, deciding…it was overwhelming. Danny was fine (I bought him an ice cream cone after his exam), but I knew The Holy Grail would include a spot in one of the state’s preeminent grammar schools.

I think I locked in an ulcer during the process.

A while later, I picked up a nervous tick in choosing to send my two oldest to Catholic school. But you know. JESUS.

This year, I am leaving behind the wonderful Chicago Public School therapists and counselors who have doted on my youngest as though he was their own. They have worked with him to the point where his IEP probably wouldn’t even be re-issued if he was starting anew. He was never in better hands. Joey has been dropped off the spectrum and will now sally forth into the world with only a mild case of ADHD (or as I consider it, a mild touch of his mother’s DNA).

It will be the first time all three of my children will be attending the same school. I should be celebrating, but instead?

I grew up in suburbia where there was never any doubt where kids would go for their education. Folks moved to a certain neighborhood FOR a school. There were no choices. My favorite Tab-drinking, chain-smoking moms had more time to worry about important things, like whether Marlena would finally escape the evil clutches of Stefano DiMaro.

No matter the era, geography, or pharmaceutical intervention, there will always be things to keep parents up late at night.

My husband tells me to relax.

My mom tells me it will all be fine.

My ticks and insomnia refuse to listen.

The thing is, there is no way of knowing what decisions are more likely to result in a happy, well-rounded child. I do not have Miss Cleo’s psychic abilities. I am riding high on guts, instinct, and love.

One of my favorite times as a kid was actually watching a bit of “Days of Our Lives” with my mom. I loved the intrigue, the anguish, and the all-important cliff-hanger.

I never knew how it was going to end, but I never stopped hoping for the best.

It reminds me of parenting. Except I have not once sent a baby upstairs to nap and had him come back downstairs a gorgeous, grown-ass 20-year old man.

When I learn that trick, I will be sure to share.
Plastered by Marianne at Thursday, October 13, 2016 2 comments: