The following appears in the August edition of Chicago Parent. 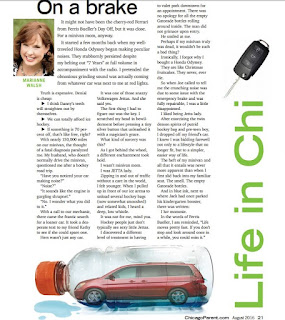 It might not have been the cherry-red Ferrari from Ferris Bueller’s Day Off, but it was close. For a minivan mom, anyway.

It started a few months back when my well-traveled Honda Odyssey began making peculiar noises. They stubbornly persisted despite my belting out “7 Years” at full volume in accompaniment with the radio. I pretended the obnoxious grinding sound was actually coming from whatever car was next to me at red lights.

I think Danny’s teeth will straighten out by themselves.

We can totally afford ice hockey.

With nearly 150,000 miles on our minivan, the thought of a fatal diagnosis paralyzed me. My husband, who does not normally drive the minivan, questioned me after a hockey roadtrip to Crystal Lake.

“Have you noticed your car making noise?”

With an emergency call to our mechanic, there came the frantic search for a loaner car. It took a desperate text to my friend Kathy to see if she could spare one.

Hers wasn’t just any car.

It was one of those snazzy Volkswagen Jettas. And she said yes.

The first thing I had to figure out was the key. I scratched my head in bewilderment before pressing a tiny silver button that unleashed it with a magician’s grace.

What kind of sorcery was this?

As I got behind the wheel, a different enchantment took hold. I wasn’t minivan mom.

I was JETTA lady.

Zipping in and out of traffic without a care in the world, I felt younger. When I pulled up in front of our local ice arena to unload several hockey bags (now somewhat smooshed) and related kids, I heard a deep, low whistle.

It was not for me, mind you.

I discovered a different level of treatment in having to valet park downtown for an appointment. There was no apology for all the empty Gatorade bottles rolling around inside. The man did not grimace upon entry.

He smiled at me.

Perhaps if my minivan truly was dead, it wouldn’t be such a bad thing?

Ironically, I forgot why I bought a Honda Odyssey.

They are like Christmas fruitcakes. They never, ever die.

So when Joe called to tell me the crunching noise was due to some issue with the emergency brake, and was fully repairable, I was a little disappointed.

I liked being Jetta Lady.

After exorcising the twin demon spirits of putrid hockey bag and pre-teen boy, I dropped off my friend’s car. I knew I was bidding farewell not only to a lifestyle that no longer fit, but a simpler, easier way of life.

The heft of my minivan and all that it entails was never more apparent than when I first slid back into my familiar seat. The smell. The empty Gatorade bottles.

And in blue ink, next to where Jack had once parked his kindergarten booster, there was written:

In the words of Ferris Beuller, I am reminded, “Life moves pretty fast. If you don’t stop and look around once in a while, you could miss it.”
Plastered by Marianne at Tuesday, August 30, 2016 4 comments: