The Time I Cheated

This week's Super Bowl scandal got me thinking...

How big of a cheat am I?

So there was this time the parents of Jack's hockey team may have mistakenly given the impression that we were hearing-impaired.

It was all done with the best intentions. 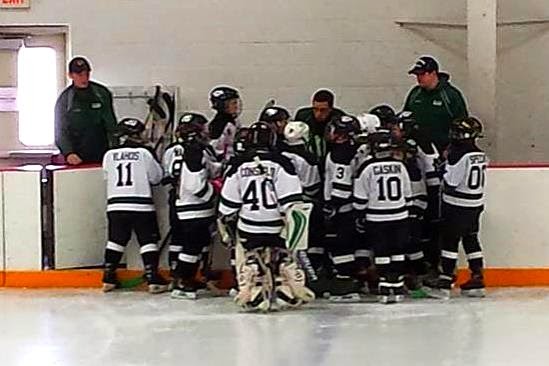 Week 30 of The Contest has me honoring a product I wish I knew about during last year's Polar Vortex.  Better late than never!

Based on the expression “cold hands, warm heart,” I am practically Mother Teresa. That is, my hands are blocks of ice most of the time. I also have a very cold nose. This quite possibly qualifies me as part Labrador.

With three sons who love the outdoors and all things winter, I have suffered through many cold seasons with empty bags of Wonder Bread covering my hands beneath mittens. I figured if it was good enough to do in the 1970s, it was certainly good enough to do now.


For the record, it is SO not good enough.

Recently, one of my son’s hockey dads gifted me with HotHands Hand Warmers. The result? I could not rid my pantry of hundreds of empty Wonder Bread bags fast enough. How I did not know about this miraculous invention is beyond baffling. But this winter? I don't even hate sledding.

And maybe I even took the kids to an outdoor ice rink.

All because of you.

And your Hand Warmers.

While I have not received a response to date, I am still holding out hope - which leaves my total at 69.  To check out the competition, visit Andrea today!

Knocking on My Heart

The following appears in the January edition of Chicago Parent 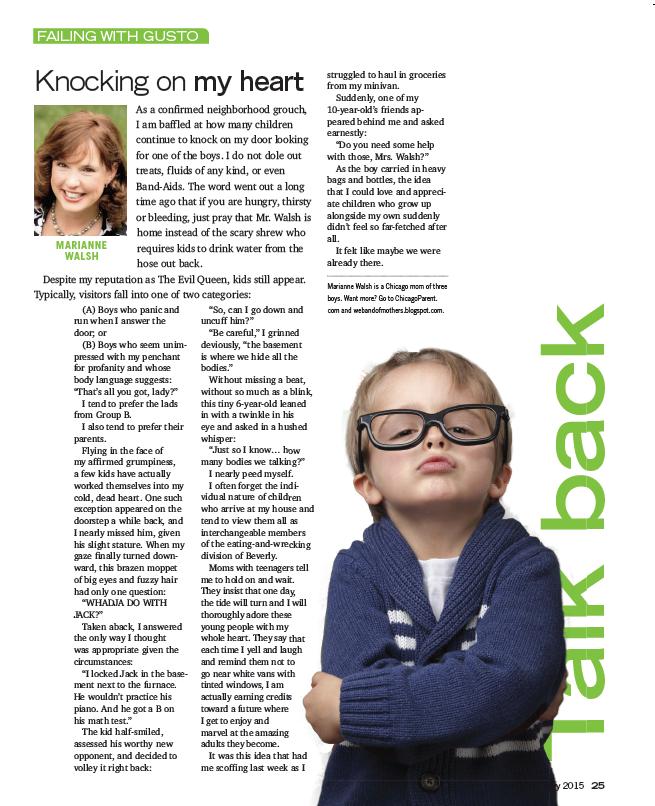 As a confirmed neighborhood grouch, I am baffled at how many children continue to knock on my door looking for one of the boys. I do not dole out treats, fluids of any kind, or even Band-Aids. The word went out a long time ago that if you are hungry, thirsty, or bleeding, just pray that Mr. Walsh is home instead of the scary shrew who requires kids to drink water from the hose out back.

Despite my reputation as The Evil Queen, kids still appear. Typically, visitors fall into one of two categories:

(A) Boys who panic and run when I answer the door; or

(B) Boys who seem unimpressed with my penchant for profanity and whose body language suggests: “That’s all you got, lady?”

I tend to prefer the lads from Group B. I also tend to prefer their parents. Flying in the face of my affirmed grumpiness, a few kids have actually worked themselves into my cold dead heart. One such exception appeared on the doorstep a while back, and I nearly missed him given his slight stature. When my gaze finally turned downward, this brazen moppet of big eyes and fuzzy hair had only one question:

“WHADJA DO WITH JACK?”

Taken aback, I answered the only way I thought was appropriate given the circumstances:

“I locked Jack in the basement next to the furnace. He wouldn’t practice his piano. And he got a B on his math test.”

The kid half-smiled, assessed his worthy new opponent, and decided to volley it right back:

“Be careful,” I grinned deviously, “the basement is where we hide all the bodies.”

Without missing a beat, without so much as a blink, this tiny little six-year-old leaned in with a twinkle in his eye and asked in hushed whisper:

“Just so I know…how many bodies we talking?”

I nearly peed myself. I often forget the individual nature of children who arrive at my house, and tend to view them all as interchangeable members of the eating and wrecking division of Beverly. Moms with teenagers tell me to hold on and wait. They insist that one day, the tide will turn and I will thoroughly adore these young people with my whole heart. They say that each time I yell and laugh and remind them not to go near white vans with tinted windows, I am actually earning credits towards a future where I get to enjoy and marvel at the amazing adults they become.

It was this idea that had me scoffing last week as I struggled to haul in groceries from my minivan. Suddenly, one of my ten-year-old’s friends appeared behind me and asked earnestly:

“Do you need some help with those, Mrs. Walsh?”

As the boy carried in heavy bags and bottles, the idea that I could love and appreciate children who grow up alongside my own suddenly didn’t feel so far-fetched after all.

It felt like maybe we were already there.
Plastered by Marianne at Monday, January 12, 2015 10 comments: