There is nothing like a weekend morning when the kids sleep in. It's as though the universe is finally rewarding me for being a benign dictator.  Then the universe laughs at me and calls me fat. Why? Because these rare occurrences are almost always synced directly to the days where we have to be up and out early. After a grand time was had by all on Saturday night, the troops were done in and sleeping soundly at 8:15 am. Yet soccer lines had to be drawn at the Dan Ryan woods for the boys' summer program! Up up and away!

It took shaking, yelling, and physically dragging little boys out of bed to get them moving. Somebody may have even been promised a pony. I didn't bother brushing their teeth or combing their hair. We needed to be there at 8:30 am sharp. We ran out of the house in mismatched clothes with bedhead and a vague purpose. I had never painted soccer lines before. Were they like football lines? He's at the 40, the 30, the 20...he's...going.... all...the...way!  Do they even say stuff like that in soccer? Where was my husband on this morning? You remember Joe? The guy who actually played soccer in high school and might know a thing or two about these flippin' lines?  He was at work. Probably laughing at me. I raced down Western Avenue wishing aloud that I had time to stop at Starbucks. That was a mistake. The boys began clamouring for $20 Starbucks danish. Now I was really crabby.

We screeched into the parking lot with a jolting force. But when I opened the doors, all I heard were birds chirping away. I looked around for my fellow soccer artisans. We saw nada: 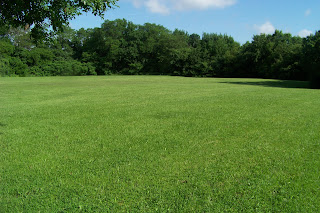 I looked again at the sheet I was given with required volunteer dates.  Perhaps I had gotten it wrong?  It wouldn't be that abnormal for me to mess up dates, but no. June 11 & 12 were clearly marked. So I tried to call the phone number listed for the league.  It was disconnected. I located some Chicago Park District workers who told me there was nothing on the calendar about lining the fields. Could I be experiencing late-onset schizophrenia? Wasn't I just talking to myself in the car and hearing Joe's laughter? Ooooh. Maybe they'd put me in one of those nice facilities where I could make paper flowers with really dull scissors and get lots of rest.

Instead of indulging my mental-illness fantasy, we decided to wait at the soccer fields to see if we were merely more prompt than others. Joey immediately fell in a huge puddle and started screaming. Once I got him calmed down, he agreed to be photographed: 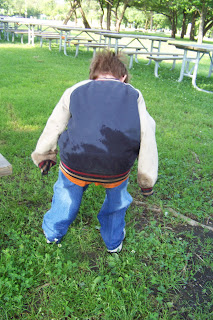 (Follow-up: I received an email from the league later on Sunday that indicated work on the fields is mostly done on the Saturday with Sunday being held for anything incomplete.  Apparently, everything was done on Day 1. They apologized and advised that they will make this clearer to new parents going forward. I do not in fact have late-onset schizophrenia. No paper flowers for me.).
Plastered by Marianne at Monday, June 13, 2011