Daniel's long-time dream of owning and operating his own lemonade establishment is about to come true.  My little entrepreneur has been searching for venture capitalists since he was four years old. His favorite game is to practice giving "change" to imaginary patrons.  He's even scoped out various locations for the greatest amount of foot traffic.  His mother has briefed him on overhead, pricing, and net profit.

Plus, his Uncle John has almost finished building the actual stand.  I'm not sure what to expect, but anything is going to be better than the computer box Daniel asked to use to construct his lemonade stand a few weeks ago.

My boy may have gotten his financial acumen from other people in the family, but he certainly inherited some of his mother's marketing savvy (as well as her spelling deficiencies): 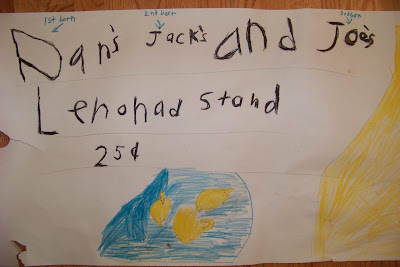 With or without spelling errors, I found Dan's attempt charming. I  may even have it laminated this weekend.  I particularly enjoyed his decision to designate the birth order of each of the stand's proprietors:

For as much as Daniel can turn my hair grey with all his arguing, negotiating, and bargaining, he's got a certain drive that I really respect.  He acquired none of his mother's fatalistic tendencies, and instead sees the world in need of conquering.  For as often as I try to teach Daniel to "play it safe," he insists no obstacle can really stop him. Of course with an adult height predicted in the realm of 6'7" - 6'8," obstacles should know better than to get in Daniel's way.
Hats off  to the little boy who knows no limits.  And a little sympathy please for the poor mom who keeps trying to set them.
Plastered by Marianne at Saturday, June 18, 2011