The American Revolution: An Excuse to Not Take Out the Garbage?

I'm on the phone with Atheist-Friend and she tells me she's reading the John Quincy Adams biography.  I stifle a yawn and feign interest as she goes into detail about JQA's upbringing.  Then she makes a comment about JQA's trip to France with his father John Adams.  Supposedly this journey was a sort of turning-point in the young boy's life.  Historians and biographers have cited it in detail as having a significant impact on the future president.  In an aggravated tone, Atheist-Friend provides her own interpretation of this historical trip:

Yeah, I know what happened there.  "Turning point" my ass.  That mom (Abigail Adams)  was home with four young children and dad comes marching in to announce he's sailing out on the next ship.  So what does mom say?  "Not without taking one of these frickin' kids with you, you're not."

I promised Atheist-Friend she'd get credit for that theory.

Atheist-Friend got me thinking.  I started doing a little research on the founding fathers.  And what did this finding mother discover?

Note these numbers reflect "legitimate" children as I couldn't find the numbers on other kids produced from various dalliances.  Atheist-Friend was right.  These guys were so bogged down by children and stepchildren, they started a revolution to escape the monotony of potty training and strep(t) throat.  When I dug deeper, I discovered that the two men with step-children (Washington and Madison) were some kind of cousins.  Perhaps the impetus of the American Revolution started over Christmas dinner and went along the lines of:

Washington:  My stepson Jacky is failing geometry and his mother is up my butt to set him right.  Every time I try that, all I get is "you're not my real dad." 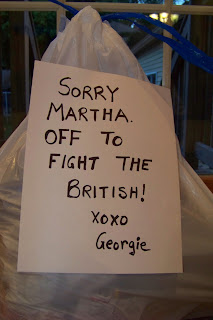 Madison:  That sucks, bro.  You got to get out of that mess.  You'd probably have an easier time taking down England than teaching that nitwit math.

Washington (thinking):  You may be on to something, Jimmy.  I mean Martha can't hold a grudge against a fellow who is fighting a war, right?  By God, let's do it.  Round up the boys!

So built a country.  I really can't blame these guys for wanting out of Dodge so badly.  I went to the dentist's office a few months ago to get an old filling dug out and replaced.  The procedure was pretty grueling and took a lot longer than the dentist had anticipated.  He apologized profusely for the "ordeal."  For me, it was the longest I had spent with my feet up and without a kid telling me he had to pee in years.  I thanked him.

In our household, the modern equivalent to John Adams' trip to France is Joe's trip to every funeral home within a 100 mile radius.  As alluded to in previous posts, my husband is a hoarder of people.  He is friends with the kid he went to kindergarten with, the girl he took to prom, and every 3rd person in Beverly.  While this is wonderful in many ways, it becomes an issue when people die.  He spends at least 3-4 nights a month going to wakes.  When the kids were babies, I would fly off the handle as he spent so many nights at the firehouse and seemingly the other half of the evenings paying his respects.

Without even knowing it, I eventually pulled my own Abigail Adams.  I started asking Joe to take between 1-3 children with him to every wake.  My sons have since attended more wakes and funerals than most people approaching their 70's.  At first, I was a little worried about issues they might have in seeing so many dead bodies.  Yet Jack now describes these events as "the parties with the dead people."  And why not?  There's usually food, crowds, and a few Irishmen in the parking lot with beer coolies.  Last year, he indicated he'd like to have his birthday party at Blake-Lamb Funeral Home.  I told him we should probably stick with Chuck E. Cheese.

I think I may need another filling replaced soon.
Plastered by Marianne at Tuesday, June 07, 2011