The Hanukkah Coolie Has Gone Missing! 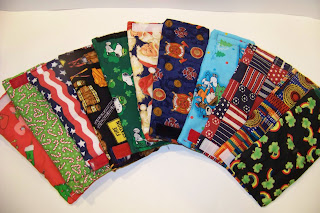 As part of this blog's unwavering desire to uphold a certain standard of editorial integrity, I spent one hour digging around my house for the aforementioned Hanukkah beer coolie from the previous post.  For those not well-versed in the art of warm hands while imbibing, a beer coolie is a puffy cloth wrapper designed to be placed around a beer bottle with Velcro.  During my fruitless search, I unearthed just about every other beer coolie including the limited edition, hard-to-find Kwanzaa one.

Joe's cousin has been sewing these for years.  Every holiday that sells a corresponding fabric pattern has been memorialized in a hand-sewn beer coolie.  As an homage to our Jewish friends, Joe's favorite has always been the Hanukkah one.  Over the winter, I wore Joe's coat on a number of occasions.  Each time, I happily reached into his pockets feeling grateful that he'd stashed a pair of gloves in there.  And each time, I wound up pulling out the much-loved Hanukkah beer coolie.  He apparently kept it in his coat pocket for "emergencies." 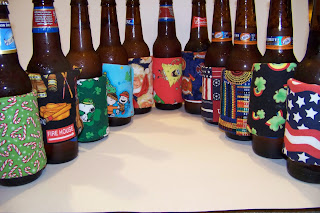 Desperate, I searched every coat, every drawer, and every car trying to locate the lost sheep of beer coolies.  With another Irish Fest on the horizon, I may have to put in an emergency call to cousin Kate.

One would think that a bunch of grown men would feel a little silly sporting a Santa Claus or leprechaun coolie around their beers.  Not so.  Once again, the hidden jewel of the southside of Chicago proves that loyalty and gratitude know no bounds.  If cousin Kate spent 20 hours sewing up pink Easter Bunny beer coolies, then by God, they would be loved and used.  If cousin Kate decided that little squirrels dressed as pilgrims was the way to go for Thanksgiving, 40 year-old men the size of tanks would slap them on with a wink and a smile.  Love and devotion to family is the #1 tenet of this neighborhood.  It's the reason I'm able to sleep at night feeling fairly certain my sons will never put me in a home.  Unless of course those violin lessons come back and bite me in the ass.

So I will continue to love and cherish cousin Kate's beer coolies like this area cherishes each other.  I have seen Kate's coolies sported all around Beverly by thousands of people. They are shared and passed along like a firm handshake and a "hello."

Sometimes it is just nice to be wrapped in a big, warm coolie.  Even if a little alcohol gets spilled on you now and then.

A reward of a case of beer is being offered for any information leading to the safe return of Hanukkah coolie.
Plastered by Marianne at Thursday, June 02, 2011