There Still Wasn't Any Lightening

This soccer league is going to kill me. I already missed Jack's violin recital to participate in the parent meeting for this most recent addition to my over-scheduled life.  My husband naturally attended the recital instead and got to hear all about Jack's ear and uncanny ability. The one chance I would have to enjoy the fruits of my labor (hours spent overseeing practice) defaulted to Joe. So while I'm at a meeting about water bottles and cleats,  Joe is heralded by the local school community as the great supporter of the arts. The man can't even tell you what a treble clef is. It just figures.

I probably should offer up some selfless notion that the boys' successes belong to them and not me. I call B.S. on that. This child-rearing thing is a lot of work, and if the kids end up as criminals, the mother always gets the blame. So if I am to be charged with their failures, then shouldn't I also be allocated some credit in their successes?   Noble mother complex?  I failed that course along with cooking and sewing.

Then there was this past Sunday. As many of you have already read, I woke the kids to go paint field soccer lines at 8:15 am. When I arrived, nobody was there and I later discovered that the work had been completed the day before. That evening (when I finally read the requirements to play), I was forced to make an emergency visit to Dick's Sporting Goods to buy shin guards. I did have a $10 off coupon, so perhaps there is some sunshine in this story.

After weeks of preparation, discussion, and misfires, we reached game day in fever pitch. Let's just hope it wasn't due to another round of strep(t).

I looked out the window as game time drew near and watched wave after wave of rain storm rip through the area. No worries. The soccer league people assured the parents several times over that games would be played in rain or shine. Muddy fields were no impediment to the indomitable spirit of 5-7 year olds. If there was no lightening, all games were a go. I suited up the kids in their shiny new shin guards and off we headed to the Dan Ryan Woods.

As I drove home in a fit cursing out soccer and all team sports for that matter, I got angrier and angrier:

Let's just say I'm not known for maintaining any semblance of reason while angry.

When we got home it was raining again and I could hear our alarm system going off.  I quickly stepped over a box at our front door to deactivate the alarm.  I spent 10 minutes trying to figure out why it wouldn't go off before I realized there was a message on it saying "SEEK COVER IMMEDIATELY....TORNADO WARNING IN EFFECT...."

Oops.  Maybe that's why they cancelled soccer?  Regardless. There still wasn't any lightening.

If you think my indignity knows no bounds, you would be correct.
I'll gloss over the next hour or so of the children in hysterics and me trying turn off the alarm. Plus, our basement is gross.

After things settled down, I remembered that box I had stepped over on my way in earlier. I went outside to collect it, and thankfully it was dry and intact.

Do you remember that briefcase in the movie Pulp Fiction that glowed?  Everyone coveted it and was willing to kill people to get their hands on it.  Welcome to my gold-lit briefcase: 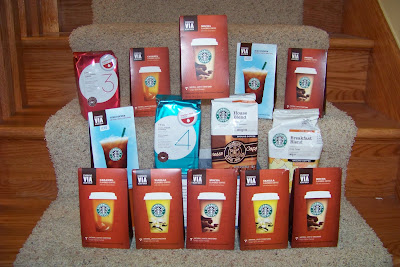 That's right. In the midst of cancelled soccer practices, tornado warnings, and blaring alarm systems, My Fairy Godmother (Aunt Susie) delivered a care package of coffee. And not just regular coffee, it was the good stuff.   Starbucks.   Along with their standard brews, there was also some of the new VIA instant coffee.  I use those when Joe has already loaded the kids in the car and thinks I'll be right out (which I will be as soon as my water boils).

Once again I had hit my limit of stress and aggravation. Once again the universe (and Aunt Susie) provided comfort and aid.

Irrefutable evidence that there is a God as far as I'm concerned. If you want to stop by and discuss it over a cup of coffee,  I'm STOCKED.
Plastered by Marianne at Friday, June 17, 2011