The Food Network Would Have Stopped Filming

Trying to keep order in a house of boys is no easy task. It is made worse by my husband's endless note-taking on various dining establishments he has seen on cable television that he wishes to try for himself. I have found receipts, gum wrappers, and napkins all over my house with the names of restaurants scribbled across them.

Once Joe retires, his dream in life is to drive around the entire country and eat at all the places highlighted on The Food Network.  Perhaps this is my punishment for never cooking the man a decent meal.  We had a talk once about his dream:

Me:  This is what you want to do after working 2 jobs for 20 plus years?  You want to drive around and eat?

I'm not sure what kind of aerobic, fat-burning golf Joe plays, but my style usually involves a cart and a cocktail.  Still, I had to give the man credit.  He had a vision and a plan.

Since there are still quite a few years before Joe retires, I try to be the supportive wife by going with him in search of local restaurants featured on The Food Network.  On Diners, Drive-Ins and Dives, a northside Mexican restaurant called Cemitas Puebla was highlighted.  Joe took special note of host Guy Fieri.  Because my husband watches these food shows so often, he insists he can tell the difference between Guy just faking an enthusiastic bite of local fare and when Guy really seems to find the food exceptional.  When he watched the Cemitas Puebla show, he told me that it was the happiest he'd ever seen Guy while eating food.  I took his word for it. 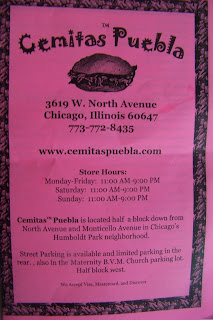 With the older boys at school one sunny afternoon, we packed up Joey and aimed our minivan north.  Upon arrival, the apparent manager greeted us warmly and explained the menu.  Our food was delivered quickly and I immediately began to value Joe's vision.  The food made my eyes water - it was just that good.  Yet before I had a chance to take a second bite, Joey started choking on his steak taco - the kind of choking where absolutely no air is getting through and a kid's eyes start bulging out of his head.

To provide some context to our reaction that day, my husband and I are very used to choking kids.  Danny had sensory issues which led him to choke on his food at least twice a week from ages 1-4.  We became very adept at the baby Heimlich maneuver and could do it with perfect precision every time (as shown by Danny still being alive).  We also knew not to beat on Danny's back when he was still passing air (partial choke vs. full choke) because kids will usually be able to work those kind out.  Waiters and waitresses became appalled by our disinterested reaction to a partial choke and would often start pounding Danny on the back.  Joe would become furious.  You're lodging it deeper.  You're lodging it DEEPER! The waitresses would cry and the waiters got far away from Joe.  Of course my husband would still leave a 20% tip and tell me that at least now they'll remember not to pat a partial-choke.  Lesson learned.

So back to our Mexican food.  To us, it was no big deal that Joey was choking on his taco.  But the poor manager looked stricken.  He ran over in a panic while Joe, still chewing his food, lifted little Joey and worked on the tilted position and hard, upward blows.  Then I held my hands out calmly to catch the culprit as it flew out.   Seeing what my plan was, the manager shoved my food basket at me...with the fantastic carne asada still inside.  I pushed it away and asked "Are you crazy? That stuff is awesome. I'm not wasting that."

And with that, Joey's chunk was dislodged into my waiting palms.  I headed to the bathroom to wash my hands as the manager stared after me shaking his head.

The three of us continued our delightful lunch and even ordered a few more dishes to share with the boys for dinner that night.

Although I can't be sure, I'm pretty sure the manager didn't say "come again" as we walked out.  It won't stop me from heading back up to Cemitas Puebla soon with my husband.  We have no shame when it comes to good grub.
Plastered by Marianne at Wednesday, June 15, 2011