House Arrest in the Age of Supernanny

I did it again.  In a fit of anger and frustration, I handed down a punishment that neither the offender nor I found suitable: 2 weeks of house arrest.  With only a week left of school and a sports camp on the horizon for next week, I had just undermined my own parenting by acting too hastily.  Yet after replaying it in my mind, I don't think I was that far off base in blowing a gasket.  A transcript of the moments leading up to swift and severe justice:

As a family of five drives along in their powder blue minivan, a certain obsessive-compulsive 3-year-old drops his favorite toy car and starts wailing....

Marianne: Daniel, can you please hand Joey his car?

Daniel: GOD...why do I always have to do everything around here?  It's not fair.

And then a few minutes later...

Marianne:  Who wants a piece of candy?  I have mints & butterscotch.

Marianne:  I don't have chocolate.

Marianne:  Did you finish your homework today?

Daniel (throwing himself dramatically back in his seat):  It is SO unfair that I get way more homework than Jack.  I shouldn't even have to do my homework.  I know all the answers anyway. It's, like, so easy.

Marianne:  When we get home, everybody needs to practice their piano and violin.

Daniel:  I am not practicing.  You can just send me to bed.  Without dinner.  That's fine.  I don't even care.  I'm sick of oatmeal.

Marianne (blood pressure rising):  Daniel, can I say one thing without you arguing with me?

Daniel (laughing): You can say a million things and I'll argue with you. It's fun.

That did it.  I instantly found that shrill, high-pitched, fast-talking, yappy speech pattern that most moms and children recognize.  I banished him to 2 weeks of house arrest (no playdates, nobody coming over, no parties, etc.). My husband looked at me from the corner of his eye as if to ask are you sure you want to do this?  But I kept going. With flourish.

Danny started to put forth a flurry of objections, so I added a new caveat.  For every ten things he said that were disagreeable, I'd add another day to his sentence.  Well let's just say by the time we got to the next stop sign, his term was now 15 days.  My husband gave me another look, but this time it was along the lines of I am married to you? Forever? Doh!

As the dust settled, I cringed when I remembered I had committed Daniel already to two upcoming birthday parties.  If there's one thing that drives me crazy, it's people who don't RSVP to parties, or say they're coming and then don't.  Chuck E. Cheese is like $13/head. It adds up quickly.  I racked my brain for a solution.  Then I remembered all those nanny shows Joe and I used to watch when our children were very small (Nanny 911, Supernanny). They used to make us feel better because our kids were just so well-behaved (comparatively speaking).  Yet as the boys got older and their behavior sometimes resembled that of the "bad kids" on those shows, we somehow lost interest.

I recalled that Nanny Jo liked charts.  She was always making charts to reward behavior and the kids responded well to them.  Danny loved charts!  After all, he'd been making them from the time he was 3 to track how many times a week mommy made oatmeal for dinner.

Excitedly, I altered the terms of his imprisonment to encourage positive reactions instead of the amped-up, over-dramatic displays I'd been seeing lately.  Every time Daniel could respond to one of my requests with an unprompted "yes, mom," he'd get a star. For every ten stars, I would wipe one day off his sentence.  If he could achieve consecutive 10-star days, then he would be allowed to attend the birthday parties. If he started up with the arguments, I'd rip a star off.  Here's how we're doing so far: 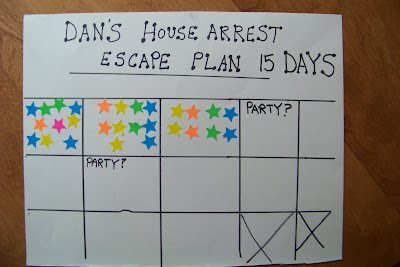 Over the last several days, I have heard more "yes, moms" than I can remember hearing from Daniel in 7 years.  I suppose I can't fault his nature in wanting to argue every point. He is named after his grandfather who was an attorney who always won his battles.  Dan has the same desire to participate in verbal sparring.  I do not.  I would be deficient in my parenting by not teaching him to respect authority.  Plus, the kid is going to be bigger than me in like 2 years.  I must rein him in now.

So let's keep our fingers crossed that he cuts his sentence in half, or I will have just paid way too much for a camp that only Jack will be attending.  And we all know how much I hate wasting money.

Except on shoes.
Plastered by Marianne at Thursday, June 16, 2011