Sticking to My Guns

According to recent media reports, there is an unsettling increase in the number of organized militia groups throughout the U.S.  What this trend reveals about the state of our union is troublesome.

But then I wondered what exactly constitutes a militia member.  Because if you look at my boys' impressive arsenal of automatic weapons and handguns, I'm fairly certain we would qualify: 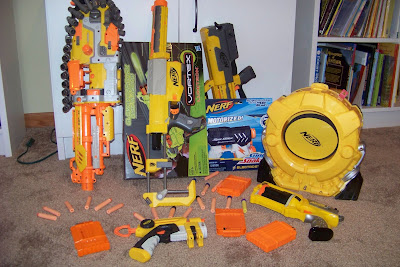 There are automatics, semi-automatics, and handguns.  One of our newest additions is the Nerf Vortex Lumitron Blaster which glows in the dark.  Because nothing says family fun like having illuminated Nerf discs smacking you upside the head as you sit in the dark trying to catch up on Smash (great show by the way).  Our vast empire of Super Soakers (currently occupying half the garage) only further confirms our status as militant extremists.  I'm sure the FBI already has a file on us. 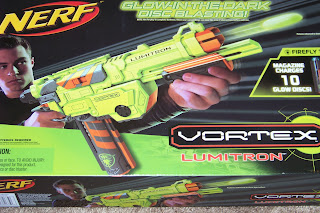 The fact is, I never intended to allow my boys to have toy guns.  Even though I come from a long line of law enforcement people, I didn't want to help glamorize violence.  But when Danny got his first Nerf gun a few years ago, I couldn't deny the obvious:

This sh*t is fun.

Our family engages in full-out battles of skill and luck with our Nerf weaponry.  The kids try to hit the moving ceiling fan for target practice.  They have come up with so many creative spins on "cops and robbers" that I don't dare ban the practice now.

It's all just another example of how parents lose some of that rigidity as the kids grow.  Flexibility is so important in raising children.  And it certainly comes in handy when you're diving behind the coffee table as Danny unloads an entire magazine on your jiggly arse.
Plastered by Marianne at Thursday, May 17, 2012