Mr. Submarine Heroes and a Side of Whoop-Ass

I got the call from my dad first.  Retired law enforcement guys always seem to know what's going on in the world well before us civilians.  They are nosier than 80-year neighbor ladies with binoculars.

"What kind of neighborhood do you live in?  You can't even get a sandwich without being jumped?"

Apparently, several hoodlums attacked a couple at the drive-thru at Mr. Sub's (which is 2 blocks from my house).  They started beating the driver to steal his money and his sandwiches. The couple were on their way home from a Catholic school fundraiser.  Yes, a fundraiser.  The Beverly theme continues.

Before these villainous blokes could finish the assault and robbery, two employees named Ernesto and Agustin Romero (brothers) came to the rescue, pinning one assailant against the drive-thru window.  While one brother held him there, the other brother ran outside to assist his brother.  Ernesto and Agustin did not have to do this.  The could have called the police.  They could have pretended they didn't see anything.  They had no idea if these guys had weapons, yet they risked their lives to help some patrons.

This is not the first time Ernesto and Agustin have been heroes.  I went on a 6-month Mr. Sub's fetish where I pushed my triple stroller (see below) up there about twice a week with the boys.  My triple stroller is very hard to maneuver and turn when space is tight, and every time Ernesto and Agustin saw me coming, they'd run out and hold the door.  I'd order a large subway.  Without even having to ask, they'd cut it up into 6 pieces so I could share it with the boys.  Then they would hand me extra napkins for my sloppy brood and give me free cups of water because I am too cheap to buy pop at restaurants. 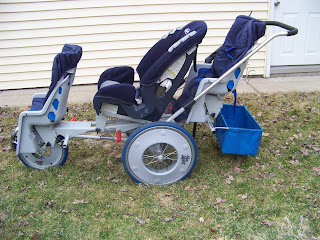 I guess you could say Ernesto and Agustin were heroes to me well before the rest of Chicago knew.  It's not often that people go out of their way for others.  I have stood in the middle of Home Depot when I was nine months pregnant yelling for someone, anyone, to help me find screws.  The Portillos' employees roll their eyes at me when I check my order to tell them they forgot to include salad dressing. When we lived downtown, men in suits would frantically press the "close door" button on the elevator when they saw me coming.  And don't get me started on The Chicago Public School system.  All in all, not too many people on this planet outside of family and friends are that nice to me.  So when Ernesto and Agustin would race to open a door for a harried housewife, it did not go unnoticed.

I encourage everyone to visit Mr. Sub's on  105th & Western if you want to meet real heroes. Capturing villains and dolling out extra napkins like few in this world do.
Plastered by Marianne at Sunday, May 22, 2011