When I was pregnant the first time, I wanted to name our son "Jack." It was always my favorite boy name. I eventually relented when my husband's father became very ill and had not a single grandson named after him. My father-in-law's name?  Daniel.

So the order of our children's names was forever changed.

But had the circumstances been different, the first two boys would have been Jack THEN Daniel.

And what do you suppose I would have named the third?

Why, you ask?  Think of the mileage I'd get out of introducing my kids:

Meet my boys...Jack, Daniel, and Coke.

And maybe Coca-Cola would've simply given me this rewards-catalog frying pan for free instead of sucking up my entire 1800 points accrued over 3 years. 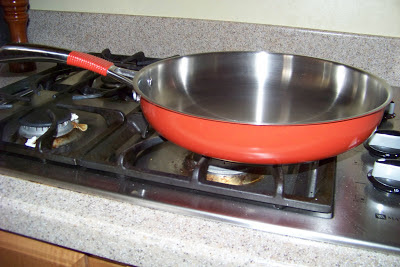 I will admit that the pan is the real deal.  It is heavy, well-made and quite attractive.  Coca-Cola doesn't mess around.

I'm thinking of making something healthy tonight in honor of that awesome Coca-Cola Balanced Living Workshop they sent me to a few months ago.  While the workshop and free frying pan are definitely the highlights of the last several months, I can't help but think that had I gone with my original order, I'd be featured on the package of every Coca-Cola product out there.

Or on the cover of a rum bottle.  Which is perhaps more fitting.