As several of my BFF's of the blogosphere prepared readings for the big LTYM Show that will take place this May 5th, a recurring question came up:

How are you guys preparing for auditions? 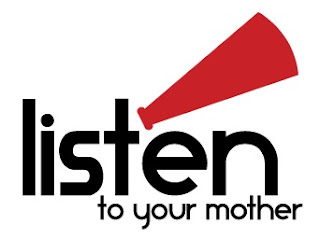 As a closet introvert, I am still amazed I was selected.  While I spent years stomping out the girl who knew only social anxiety and angst, a part of her is still with me.  I used to count steps as I walked busy city streets to provide distraction and calm.  And if murderers or muggers tried accosting me while I counted?

Hell hath no fury like Marianne in the throes of her OCD.

Still, people wanted to know how I was preparing.  In an effort to assist my tens of loyal readers, I have compiled a complete step-by-step guide for auditioning:

Two days before the audition, I was Windexing our 80-year-old etched glass windows and inadvertently bumped a nearby table into the bottom of one pane.  The result: 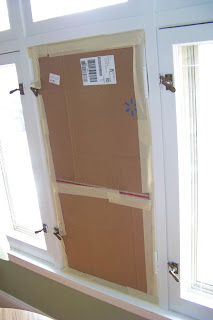 I thought for sure this was a bad omen for the impending try-out.  When I called my husband at the firehouse to let him know what happened, I started blubbering about 7 years of bad luck.

"That's for MIRRORS, Marianne.  Not windows."

My husband is so smart.

My grandmother died this past January, but our family scheduled her services for February 9th to allow travelers some time to arrange their schedules.  I thought for sure I would get in trouble with the LTYM producers for making demands for a preferred audition date this early in the process.  I figured they'd write me off as a diva immediately. 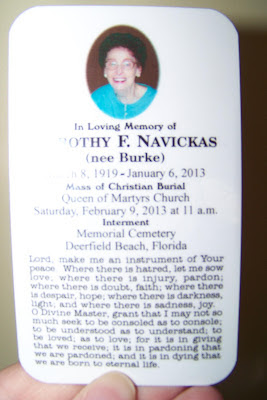 Nope.  Dead grandmas are apparently good luck.  Like broken windows and smart husbands.  RIP, Grandma Dorothy, and thanks for pulling for me!

With cousins aplenty, I opted to take advantage of the Irish mourning crowd and sneak in some rehearsal.  My cousins offered countless Bailey's and RumChata-inspired ideas about the piece.  Being equally imbibed, I happily incorporated all of these gems.

While the extra practice was certainly invaluable, I did get a little feedback from the producers after my reading:

In moments of extreme doubt and uncertainty, I sometimes turn to my husband's flask for a little dose of liquid courage.  For those who might not remember, this flask was a gift from my husband's cousin when he stood up in his wedding.  The cousin had everyone's initials monogrammed to the flask: 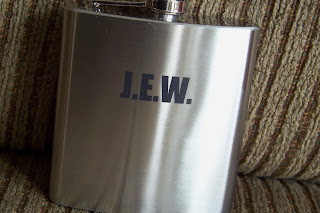 That's right, I own a J.E.W. flask courtesy of Joseph E. Walsh.  I'm also thinking of bringing it to the next Seder I get invited to.  Steph?  Rada?  You listening??  I needs me some flattened bread ASAP.

So there you have it.  The How-To Guide for LTYM success.

Good luck to everyone auditioning this weekend and congrats to all my bloggy pals who've already made it.  I also know some very talented people did not make it, but I hope that doesn't dissuade them from trying again.  The caliber of auditioners was just amazing this year.

'Cept me, that is.  I played the Dead Grandma Card.

But to all those who will be on stage this May 5th...

BREAK A WINDOW!
Plastered by Marianne at Saturday, February 16, 2013