The following appears in the October edition of Chicago Parent 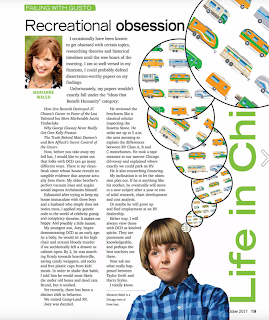 I occasionally have been known to get obsessed with certain topics, researching theories and historical timelines until the wee hours of the morning. I am so well versed in my fixations, I could probably defend dissertation-worthy papers on my findings.

Unfortunately, my papers wouldn’t exactly fall under the “Ideas that Benefit Humanity” category:

Now before you take away my foil hat, I would like to point out that folks with OCD can go many different ways. There is my clean-freak sister whose house reveals no tangible evidence that anyone actually lives there. My older brother’s perfect vacuum lines and angles would impress Archimedes himself.

Exhausted after trying to keep my house immaculate with three boys and a husband who simply does not notice mess, I applied my genetic code to the world of celebrity gossip and conspiracy theories. It makes me happy. And possibly a little insane.

My youngest son, Joey, began demonstrating OCD at an early age. As a baby, he would sit in his high chair and scream bloody murder if we accidently left a drawer or cabinet open. By two, he was marching firmly towards hoardersville, saving candy wrappers, old socks, and free plastic cups from kid meals. In order to shake that habit, I told him he would most likely die under old boxes and dead cats.

Brutal, but it worked.

Yet recently, there has been a distinct shift in behavior. We visited Camp-Land RV. Joey was dazzled. He reviewed the brochures like a classical scholar inspecting the Rosetta Stone. He woke me up at 5 am the next morning to explain the differences between RV Class A, B, and C motorhomes. He took a tape measure to our narrow Chicago driveway and explained where exactly we could park an RV.

He is also researching financing.

My inclination is to let the obsession play out. If he is anything like his mother, he will eventually move to a new subject after a year or two of solid research, chart development, and cost analysis.

Or maybe he will grow up and find employment at an RV dealership.

Either way, I will always view those with OCD as kindred spirits. They are passionate and knowledgeable, and perhaps the best teachers out there.