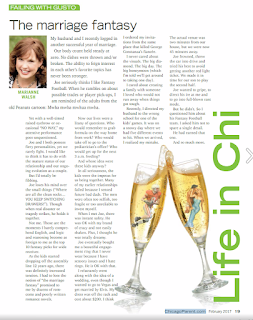 The following appears in the February edition of Chicago Parent.

My husband and I recently logged in another successful year of marriage.

Our body count held steady at zero. No dishes were thrown and/or broken. The ability to feign interest in each other’s favorite topics has never been stronger.

Joe seriously thinks I like Fantasy Football. When he rambles on about possible trades or player pick-ups, I am reminded of the adults from the old Peanuts cartoon: Mwha mwha mwhua mwha.

Yet with a well-timed raised eyebrow or occasional “NO WAY,” my attentive performance goes unquestioned.

Joe and I both possess fiery personalities. Yet we rarely fight. I would like to think it has to do with the mature status of our relationship and our ongoing evolution as a couple.

But I’d totally be fibbing.

Joe loses his mind over the small things (“Where are all the clean socks…YOU KEEP SWITICHING DRAWERS!”). Though when real disaster or tragedy strikes, he holds it together.

Not me. Those are the moments I barely comprehend English, and logic and reasoning become as foreign to me as the top 10 Fantasy picks for wide receiver.

As the kids started dropping off the assembly line twelve years ago, there was definitely increased tension. I had to lose the notion of “the marriage fantasy” promised to me by dozens of rom-coms and poorly written romance novels.

Now our lives were a litany of questions. Who would remember to grab formula on the way home from work? Who would take off to go to the pediatrician’s office? Who would get up for the next 3 am feeding?

And whose idea were these kids anyway?

In all seriousness, the kids were the impetus for us being together. Many of my earlier relationships failed because I sensed future bad dads. The men were often too selfish, too fragile, or too unreliable to invest myself.

When I met Joe, there was instant safety. He was okay with my brand of crazy and not easily shaken. Plus, I thought he was totally dreamy.

Joe eventually bought me a beautiful engagement ring that I never wear because I have sensory issues and I hate rings. He is okay with that.

I reluctantly went along with the idea of a wedding even though I wanted to go to Vegas and get married by Elvis. My dress was off the rack and cost about $200. I think I ordered my invitations from the same place that killed George Constanza’s fiancé.

I never cared about the visuals. The big diamond. The big day. The big honeymoon (which I’m told we’ll get around to taking one day).

I cared about creating a family with someone I loved who would not run away when things got tough.

Recently, I directed my husband to the wrong school for one of the kids’ games. It was on a snowy day where we had five different events to hit. When we arrived, I realized my mistake. The actual venue was two minutes from our house, but we were now 45 minutes away.

Joe frowned, threw the car into drive, and tried his best to avoid getting another red light ticket. We made it in time for my son to play the second half.

Joe wanted to gripe, to direct his ire at me, and to go into full blown rant mode.

But he didn’t. So I questioned him about his Fantasy Football team. I asked him not to spare a single detail.

He had earned that one.

And so much more.
Plastered by Marianne at Thursday, February 02, 2017